On the border between Yamagata and Akita prefectures, there is a mountain called Chokai, which is 2236 meters high.

About 30 kilometers north of Mt. Chokai, along the coast, there is a tourist spot called “象潟” Kisakata.

Kisakata is one of the scenic spots in the Chokai National Park, and is also known as the place where Matsuo Basho, a haiku poet of the Edo period, read his haiku.

This article is about Kisakata, a popular tourist destination in Akita Prefecture.

About Kisakata in Akita Prefecture

Kisakata is a scenic spot located at the foot of Mt. Chokai.

The eruption of Mt. Chokai created many islands called the Kujuku-shima Islands.

Later, in the Edo period (1603-1868), earthquakes uplifted the land around the island and made it land-locked. The top part of the previous island was left on this land, which made it look like a scattering of islands floating in the sea before, and thus became a scenic spot. The Kisakata has been designated as a natural monument. 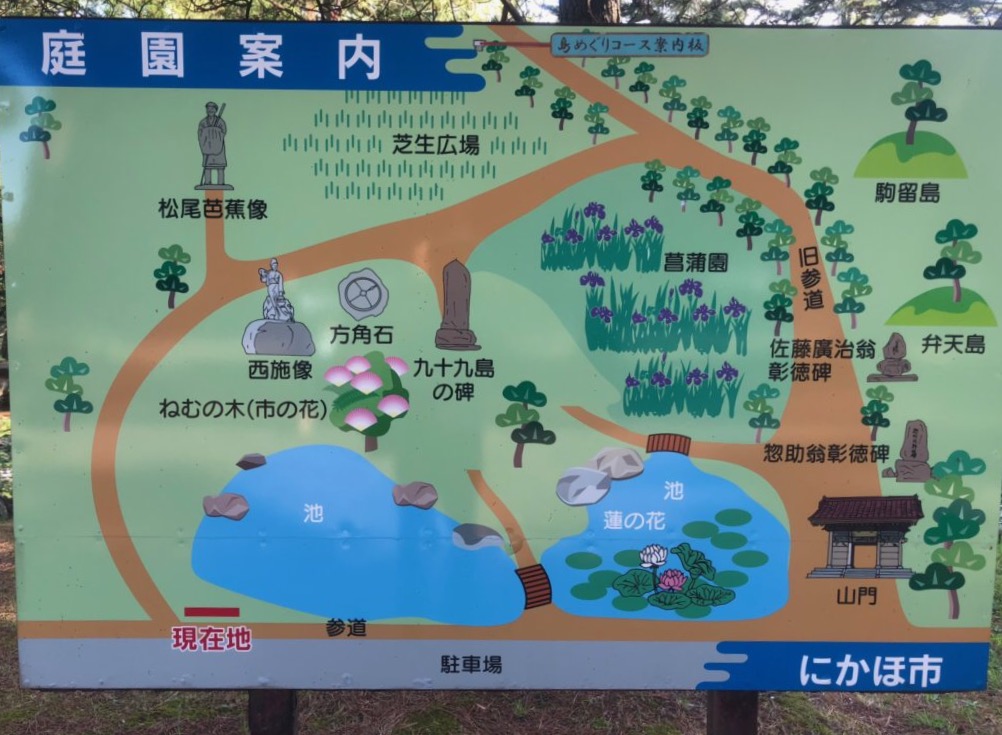 When you arrive at the parking lot, the Kisakata Garden is right in front of you. This garden has a monument to the 99 islands, a pond, an iris garden, and a statue of Matsuo Basho. It was here that Matsuo Basho composed his haiku, “Kisakata, ame ni Seishi ga Nebu no Hana (The rain-soaked silk tree flowers in Kisakata look like the beautiful woman Xie Shi closing her eyes in sorrow.)”.

There is a walking path through the surrounding rice fields, and if you follow the route on the information board, you will come to a place that used to be an island. You can actually step onto each island.

Island tour of the 99 islands of Kisakata 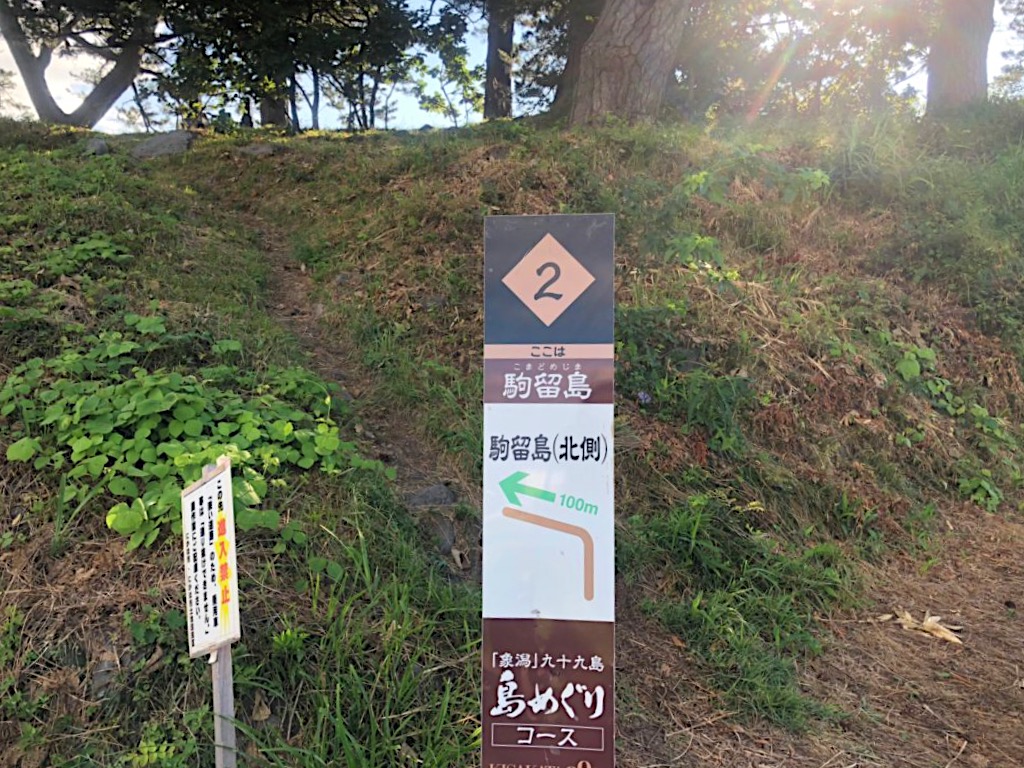 This time we decided to climb Komadome-jima Island. The island itself is small, and it takes about a minute to reach the top. 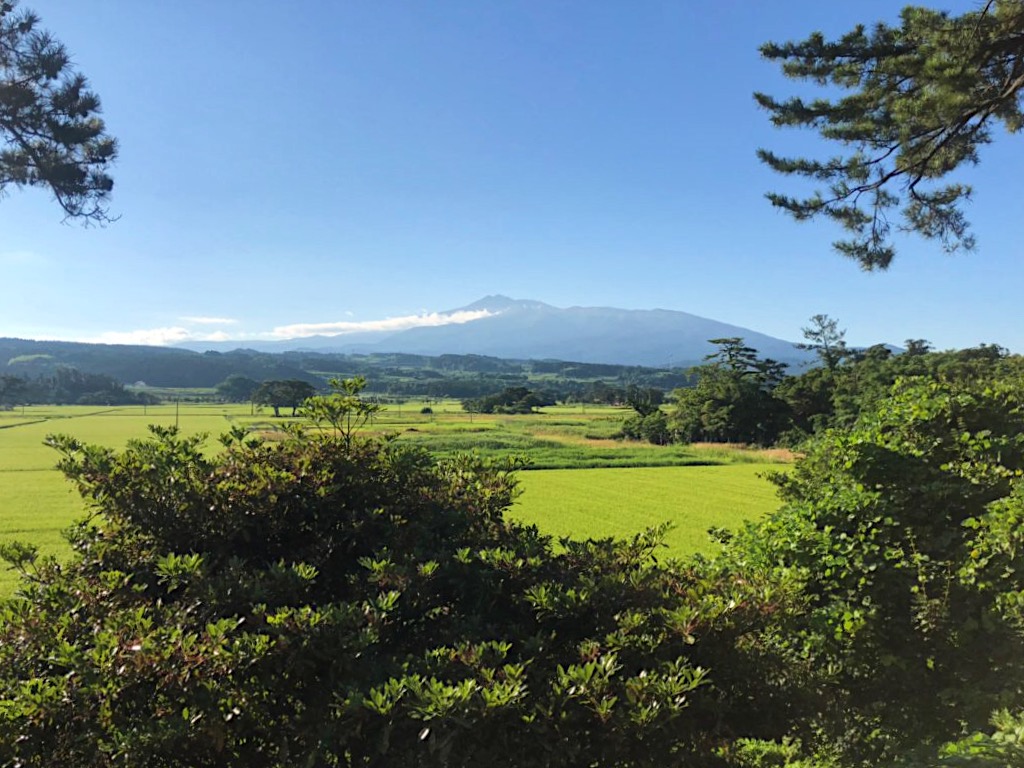 Komadome Island is covered with pine trees, and on a clear day, you can clearly see Mt. Chokai.

Next to the Kisakata Garden, there is a temple called Kanmanji temple. The fee for visiting the temple is 300 yen.

The temple was founded by Jikaku Daishi in 853. After passing through the beautifully carved gate, you will see the entrance on your right. 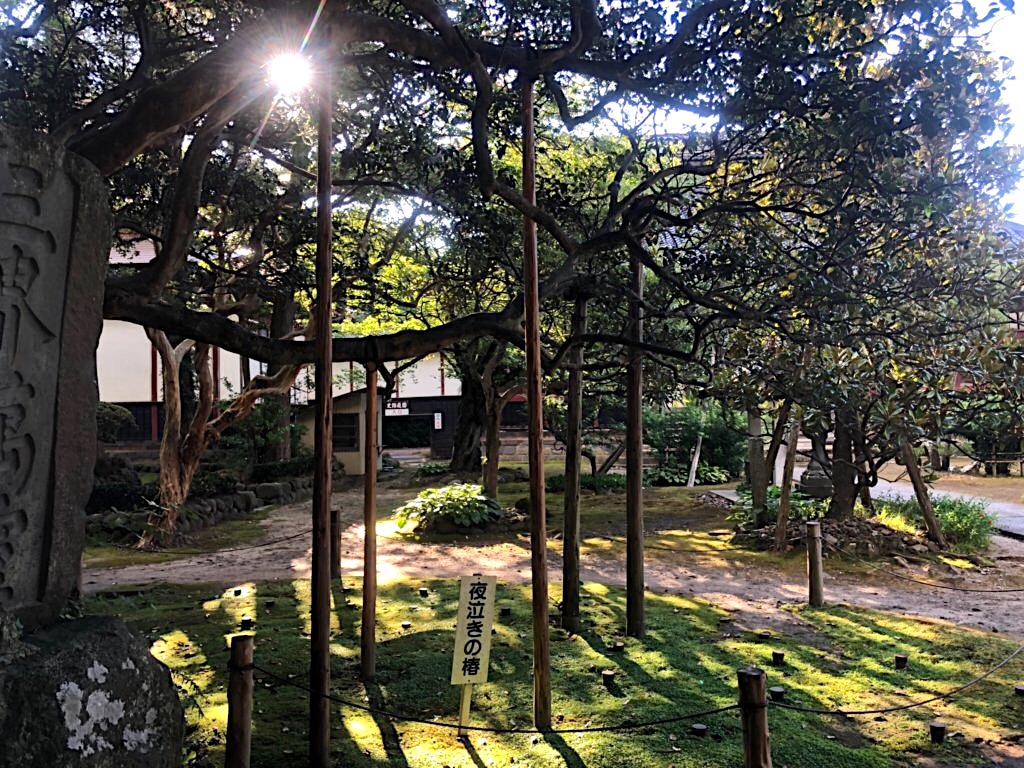 As I entered the temple grounds, I was greeted by a Yonaki no Camellia. This camellia is one of the seven wonders of Kanmanji temple, and is said to bloom on winter nights.

In the precincts of Kanmanji temple, you can also see a tree climbing Jizo and a stone on which Shinran sat.

On the way back to the parking lot after leaving the temple, there are two souvenir shops. There were kokeshi dolls and folk crafts lined up in front of the stores.

While I was looking at the souvenirs, the lady manning the store recited a haiku by Basho and talked to me about the roots of kokeshi dolls in Tohoku.

Wherever you go in Tohoku, you will find kokeshi dolls for sale as souvenirs. Kokeshi dolls are made differently in each area.

A panoramic view of the Kujuku-shima Islands from the observatory 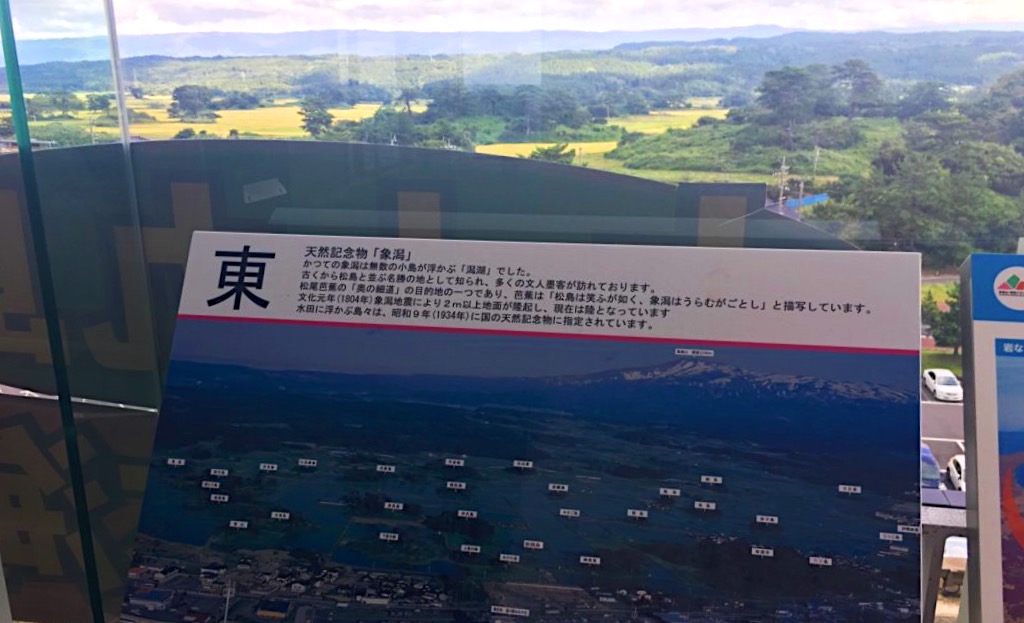 If you have time, try to stop by the observation tower on the sixth floor of this roadside station. From the observation tower at Roadside Station Nemuno-Oka, you can see the rising landscape of the 99 islands of Kisakata. When the surrounding rice fields are planted, they look just like the sea, and each island seems to be floating.

The name of each island is displayed on the information board in the observation room. Incidentally, the Kujuku-shima Islands in Sasebo, Nagasaki, seem to have been named after these islands.

A scenic spot where you can learn about natural activities

Kisakata is a scenic spot where you can learn about how the topography changes due to natural activities such as the eruption of Mt. Chokai.

Today, Kisakata is a place where you can enjoy the rare sight of many islands floating in a sea of rice paddies.

Other sightseeing spots in the vicinity

In Nikaho City, where Kisakata is located, there are hot spring facilities where you can bathe in brown-colored hot springs.

In the central part of Akita Prefecture, near the border with Iwate Prefecture, there is the deepest lake in Japan, call...
2021.11.04

If you are on your way back from a sightseeing trip to Akita Prefecture and are wondering where to buy souvenirs, there ...
2021.11.04
Swada’s Nipper Type Nail Clippers Factory Tour｜SUWADA OPEN FACTORY
What is Yuki Tsumugi (Pongee)? Learn About UNESCO’s Intangible Cultural Heritage at the Yuki Tsumugi Museum and Tsumugi Village
Home
Hokkaido & Tohoku
Akita