Kabuki is one of the three major traditional performing arts in Japan.

The other day I had the opportunity to see my first Kabuki performance. I stopped by the Kabuki-za Theater in Ginza, Tokyo, and found out that I could buy a same-day ticket called “Hitomakumiseki-ken”.

I used to think that Kabuki ticket were quite expensive, but there is a way to casually see a performance by buying a reasonably priced ticket on the day of the performance, without having to make a reservation.

Standing in line for same-day tickets

One day, on my way from the Tsukiji fish market to Ginza, I passed by the Kabuki-za Theater.

I noticed that people lined up at the entrance, so I walked closer and saw that the theater had just started selling same-day tickets called “Hitomakumiseki-ken” at their entrance. 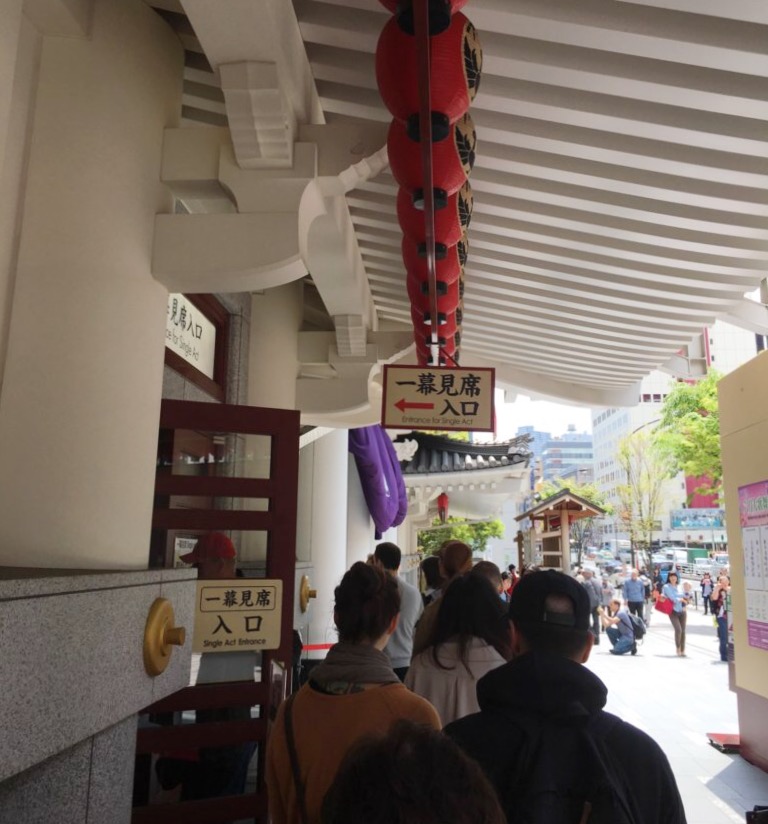 This is the line for people to buy tickets.

Perhaps my timing was good, but there were fewer people waiting in line than I expected and it looked like I wouldn’t have to wait that long, so I decided to buy a single-act seat.

A ticket to see only one act that can be bought on the day of the performance.

What kind of seats are called “Hitomakumiseki-ken”?

Normally, when you buy a ticket for a Kabuki performance, you get to see the story in three acts. A same-day ticket that allows you to see only one of the three acts is called a “Hitomakumiseki-ken”.

Program of the day and fees

The performance of the day was “Ise Dance and Love’s Dull Blade”, a story based on an actual incident that occurred in the Edo period.

It cost 1,500 yen for a single-act viewing seat. Regular tickets for Kabuki-za performances range in price from 4,000 yen to 20,000 yen, so it’s a reasonable price to try.

Checking in at the 4th floor

I had about half an hour before the show, so I spent some time wandering around the souvenir shop on the basement floor of the Kabuki-za theater. When it was time to enter the hall, I went to the reception desk on the fourth floor and was guided to the seats in the order in which I purchased my ticket. There are only 90 one-act seats available, so if you buy the tickets 91st or later, you will be directed to the standing room instead.

View of the kabuki stage from the fourth floor

This is what the stage looks like from the seats on the fourth floor. Although you can only see part of the “flower passage (extra stage section)” where the actors come and go, the main stage itself can be seen from the 4th floor seats. 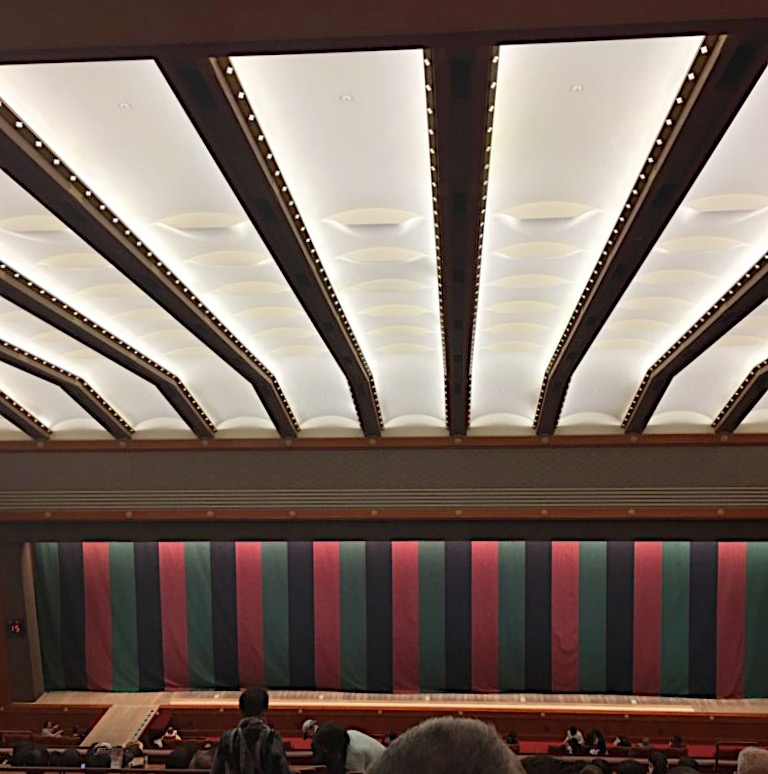 * Please note that photography is not allowed after the performance has started.

Both the stage decorations and the gestures of the Kabuki actors were so elegant that I felt as if the people depicted in the Ukiyoe paintings (one of the Japanese art forms that flourished from the 17th to 19th centuries) were actually moving.

I was seated on the fourth floor, so I couldn’t hear the lines of the Kabuki actors clearly (perhaps it was because I wasn’t used to watching Kabuki plays and wasn’t familiar with the wording), but I could kind of understand the content of the story through the sound of the actors’ voices filled with emotion.

Also, since I watched this show without any prior knowledge of what the story was about, I was surprised when the main character cut someone with his sword during the scene. I thought I would have enjoyed it more if I had at least known the outline of the story beforehand.

Earphone guides and subtitle guides were available for rent for 700 yen and 1,000 yen, respectively, so I thought I would use those next time I saw a play.

An easy way to see kabuki.

I didn’t have any prior knowledge of Kabuki, but happened to be able to buy a ticket on the day of the performance and was able to see the play.

I thought that the one-act viewing seats were a good way to casually learn about Kabuki, a traditional Japanese performing art.

If you would like to know more about the mechanisms used on the Kabuki-za stage, please read this article.

Visit the Kanamaru-za Theatre to See How the Seri and Mawari-butai Work! Learn about the history of Kabuki
* Currently closed: October 1, 2020 to March 18, 2022 Kabuki is a traditional Japanese performing art, and there are a variety of stage sets availabl...

My Maiden Visit to Tokyo

In Shibuya, Tokyo, there is a shrine called Meiji Jingu, which covers a vast area. The Meiji Jingu Shrine is visited ...
2021.11.04

Deciding Where to Buy Your Goshuin Stamp Book is One of the Joys of Travel!

A Goshuincho is a book used when having a Goshuin stamped at a shrine or temple. Isn't it difficult to decide where t...
2021.08.14

One of the pleasures of traveling is to take a bath in an onsen. Living in Nagano Prefecture, hot springs are a part ...

More and more people are getting Goshuin stamps to commemorate their visit to temples and shrines. On Instagram, twitter...
2021.08.14
My Maiden Visit to Tokyo
Yachiho Highlands is a Sacred Place of White Birch Trees! Japan’s Largest White Birch Colonies
Home
Kanto
Tokyo