Kabuki is a traditional Japanese performing art, and there are a variety of stage sets available.

In addition to the so-called “hanamichi”, the passageway used by Kabuki actors to enter and exit the theatre, there are also other effective theatrical mechanisms such as “seri” and the “mawari-butai”. Wouldn’t you like to know how these mechanisms work?

At the Old Konpira Kabuki Theatre Kanemaru-za in Kagawa Prefecture, you can actually stand on a Kabuki stage.

This article describes a visit to the Kanamaruza Theatre.

History of the Kanamaruza Theatre

Kabuki began in the Edo period. In the town of Kotohira in Kagawa Prefecture, there is the oldest surviving Kabuki theatre in Japan, built in 1835 in the late Edo period.

The Kanamaru-za is usually open to the public and can be visited inside.

Entrance to the playhouse 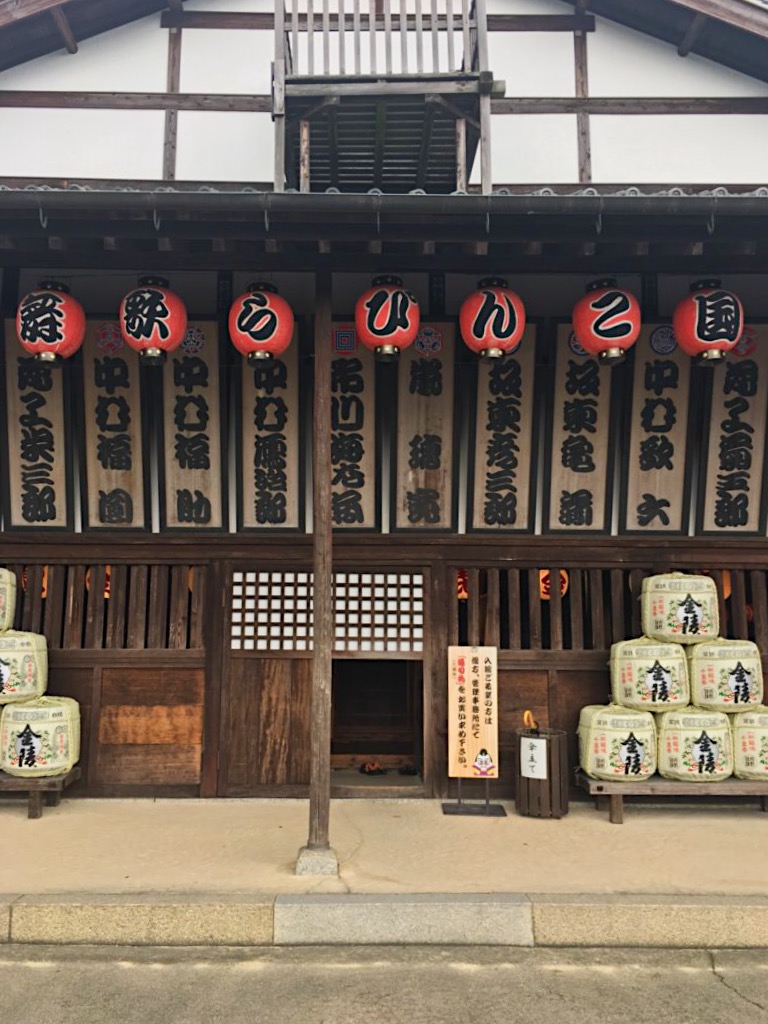 You pay an entrance fee of 500 yen to enter the Kanamaru-za (300 yen for junior and senior high school students, 200 yen for primary schools students). The entrance is deliberately narrow so that not many people can enter at once. 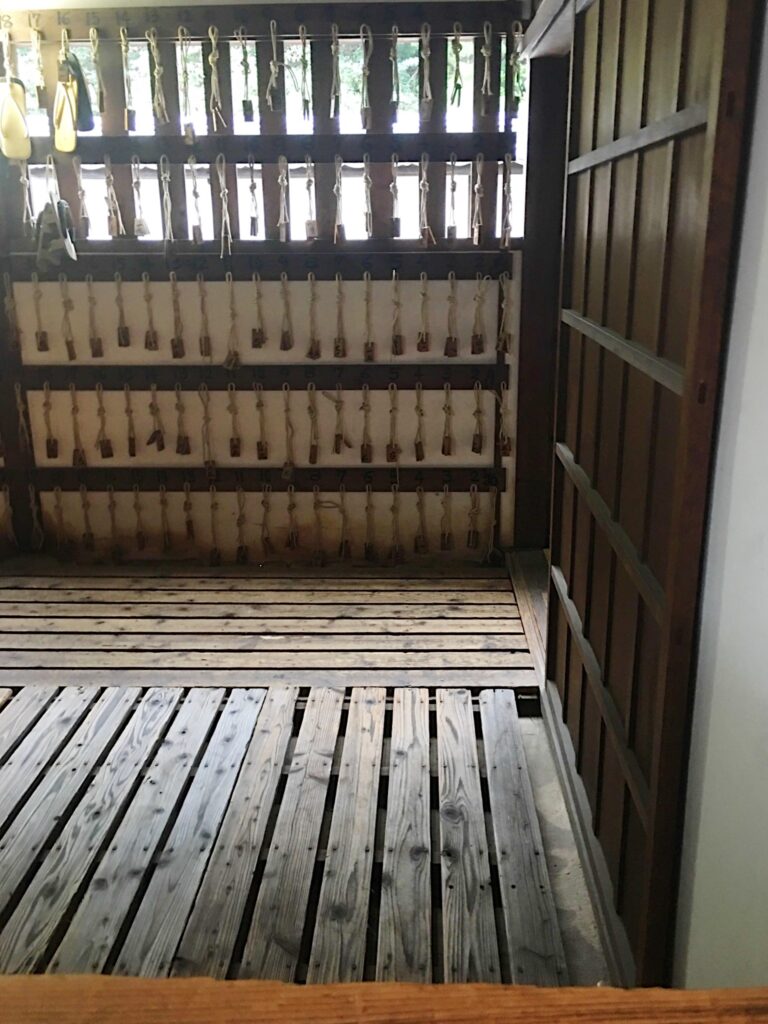 In the old days, people used to leave their footwear here and receive a wooden tag with a number on it. 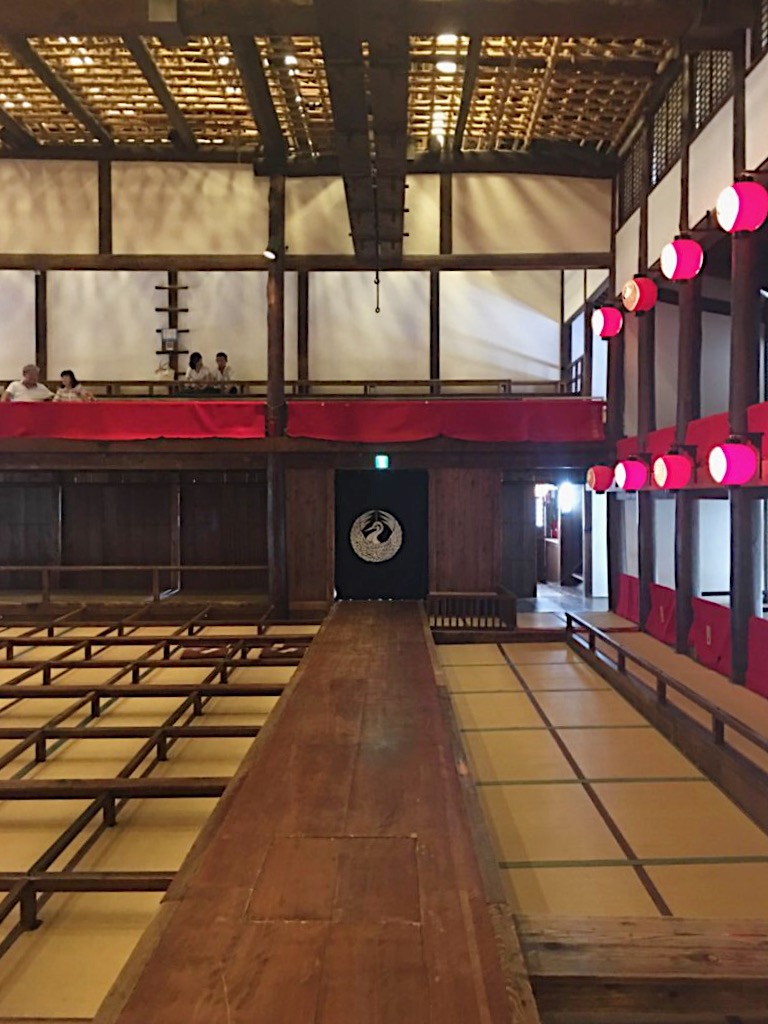 These are the spectator seats. The seats on tatami mats surrounded by wooden frames are called “Hiraba” (flat seats), and the seats on either side are called “Sajiki” (pier seats).

There is a wide aisle (Hanamichi) leading up to the stage. The distance between the audience and the walkway is very close.

The ceiling is latticed and made of woven bamboo, from which the flowers are scattered in confetti. 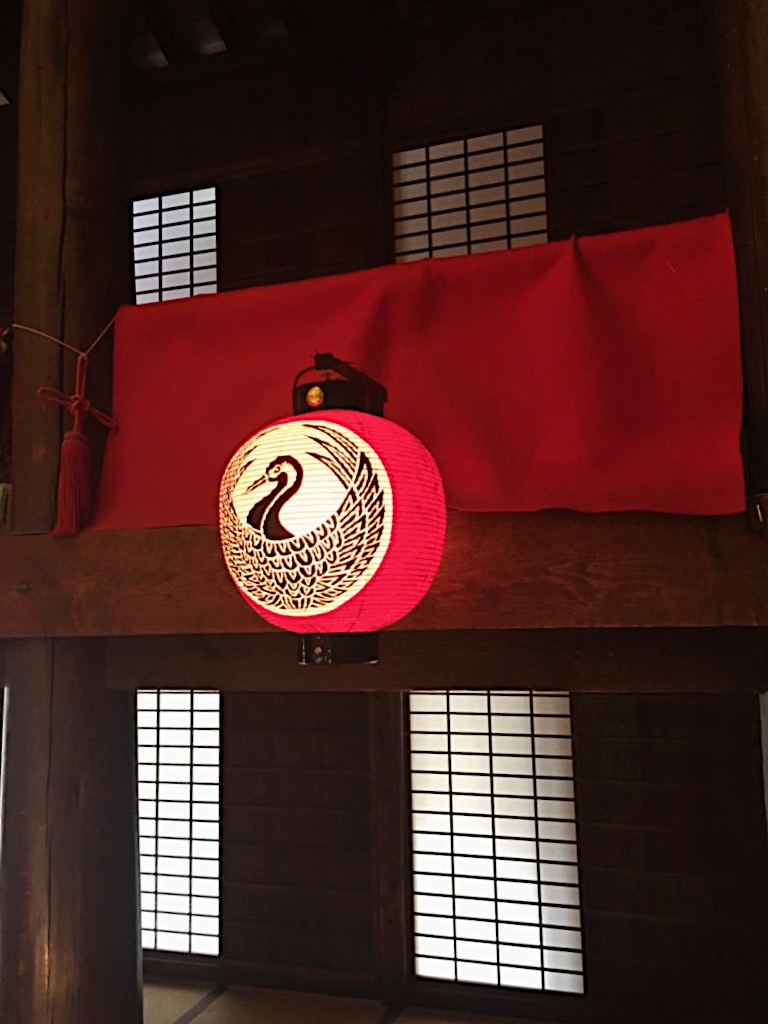 It is decorated with paper lantern with a crane design, the mark of the Kanamaru-za.

Locate the seri and the mawari-butai 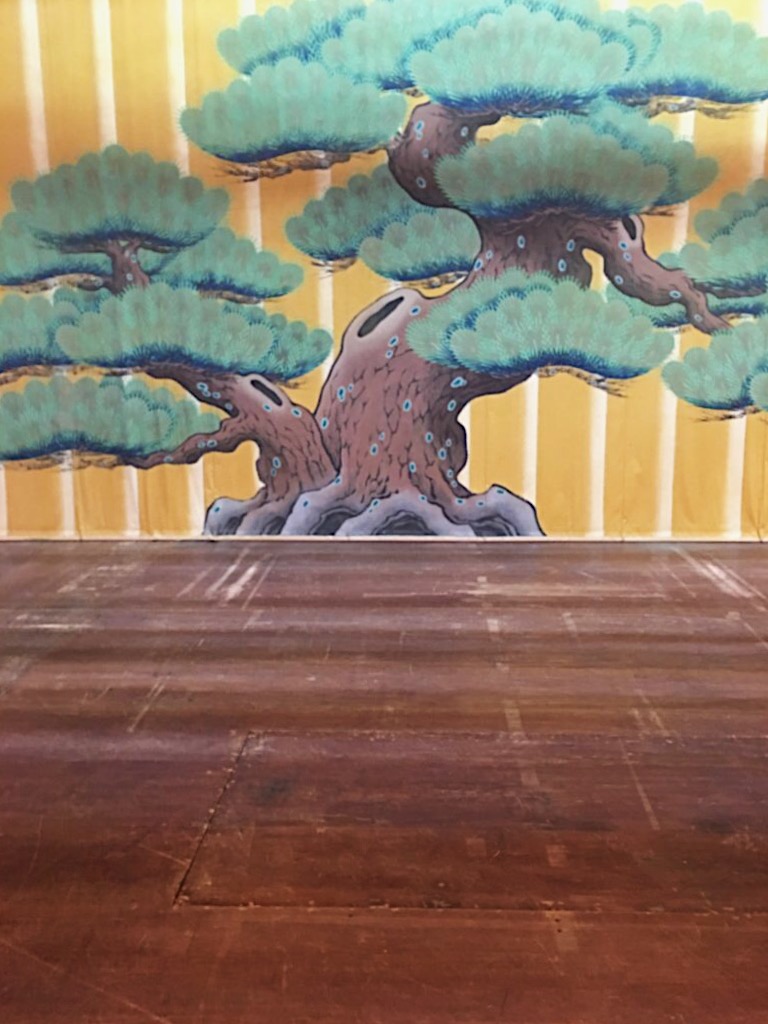 Next, we go up on stage to check the position of the naraku and the mawari-butai. The Mawari-butai is a mechanism that allows the centre of the stage to rotate and change scenes at the same time.

Naraku is also known as “Seri”. It is the part of the stage that slides up and down to allow the Kabuki actors to enter and leave the stage. If you go up to the stage and look at it up close, you can see exactly where the floor has been cut out.

We were also able to see the “kakesuji”, a device in which the actors move in mid-air.

See the tricks under the stage

Backstage, there is a tatami room where kabuki actors use to apply their make-up and change their clothes. Once you have visited these waiting rooms, you can go downstage. Below the stage, you can see how the mechanisms of the naraku and the mawari-butai work. 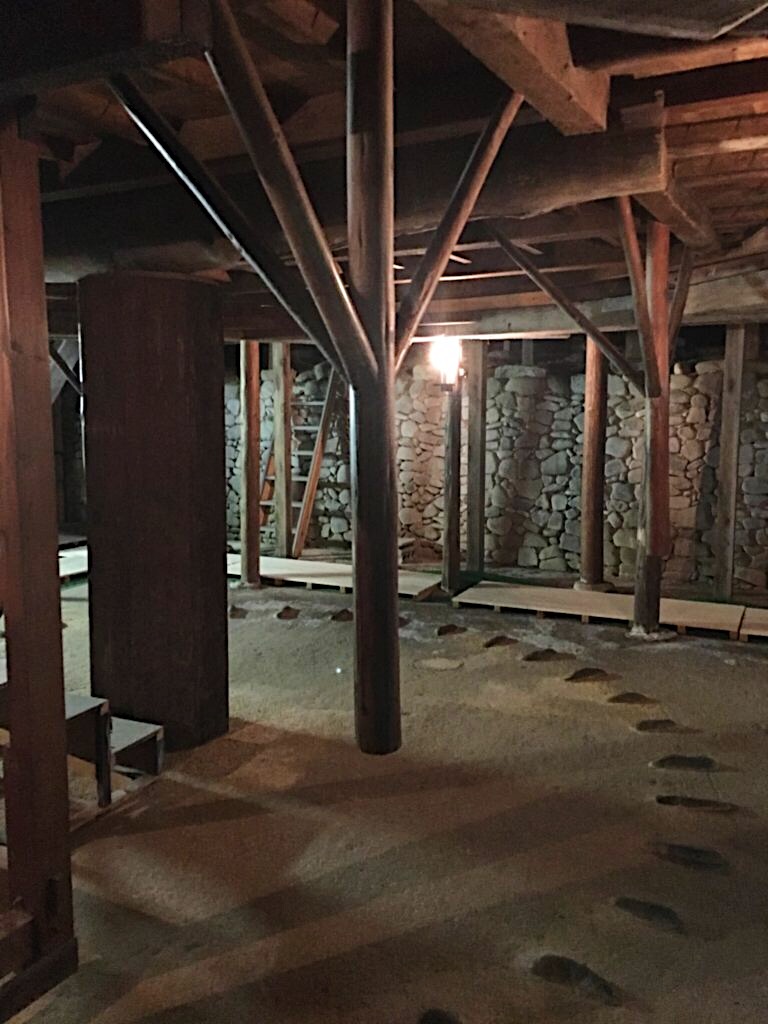 This is a trick under the mawari-butai stage. Can you see the push stick hanging from the ceiling? It takes four people to turn this push stick. So the stage was moved only by human power. 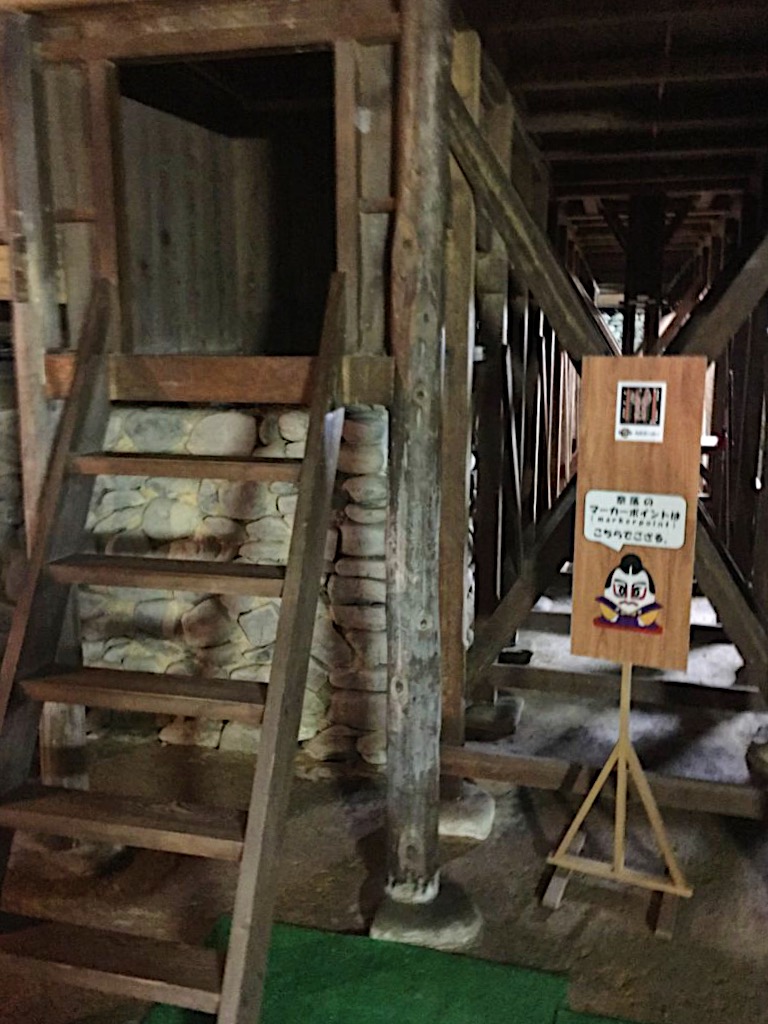 This is the entrance to the Naraku (Seri). It must be difficult for the Kabuki actors in their costumes to get in and out through this narrow entrance.

You can drop in when you visit Kompira-san

How do you like the old kabuki stage? When you visit Kompira-san (Kagawa’s famous tourist spot), it would be fun to drop in at the Kanamaru-za theatre as well.

It is a good place to visit before or after watching Kabuki.

If it's Your First Time to See Kabuki, You May Want to Try the One-Act Viewing Seats
Kabuki is one of the three major traditional performing arts in Japan. The other day I had the opportunity to see my first Kabuki performance. I stop...

Kanamaru-za is a five minute walk from the approach to Kompira-san.

There are many other places of interest in the surrounding area.

Visit to Konpira-San ｜A Popular Place of Worship That You Will Want to Visit Many Times
The other day we went to the Kotohira-gu Shrine, also known as Kompira-san. On the hillside of Mount Kotohira, overlooking the Seto Inland Sea in Kag...

How Long Does It Take to Visit Otsuka Museum of Art? ｜Tips on How to Get Around The Museum

The Otsuka Museum of Art in Tokushima Prefecture is home to more than 1,000 ceramic panels of famous paintings that ever...
2021.11.04

Sanjo City in Niigata Prefecture has long been known as a town of hardware manufacturing. In the suburbs of Sanjo City, ...
2021.11.04

Risonare Yatsugatake｜Facilities and Events You Can Enjoy Even on a Day Trip!

In Hokuto City, Yamanashi Prefecture, there is a resort hotel called Risonare Yatsugatake. In addition to accommodati...
2021.11.04
Carving Obsidian Gemstones to Make Arrowhead-shaped Keyrings
Visit to Konpira-San ｜A Popular Place of Worship That You Will Want to Visit Many Times
Home
Chugoku & Shikoku
Kagawa