Wherever you go in Japan, you’ll find an aquarium. This is because Japan is the country with the largest number of aquariums in the world. In fact, it is hard to find a prefecture without an aquarium.

Since the Japanese archipelago is surrounded by ocean, fish and marine life are easier to catch than in other countries, and it is understandable why there are so many aquariums near the coast where marine life can be managed and maintained.

However, because there are so many aquariums and we are so used to seeing them, we probably have a pretty clear idea of what marine life is displayed there. For this reason, aquariums have recently been experimenting with ways of displaying their exhibits in order to attract more visitors.

The Kamo Aquarium, located in Yamagata Prefecture, is an aquarium that specializes in jellyfish among other seawater creatures. The Kamo Aquarium has the world’s largest jellyfish tank, where you can see many different species of jellyfish.

In addition to the jellyfish exhibit, the Kamo Aquarium also holds fun performance shows such as sea lion and seal shows and feeding the sea cats.

* These programs are currently on temporary hiatus.

This article introduces the Kamo Aquarium (Kamo Suizokukan) in Tsuruoka City, Yamagata Prefecture, which is attracting attention as one of the specialized aquariums.

About Kamo Aquarium in Yamagata Prefecture

Aquarium with a Jellyfish Theme 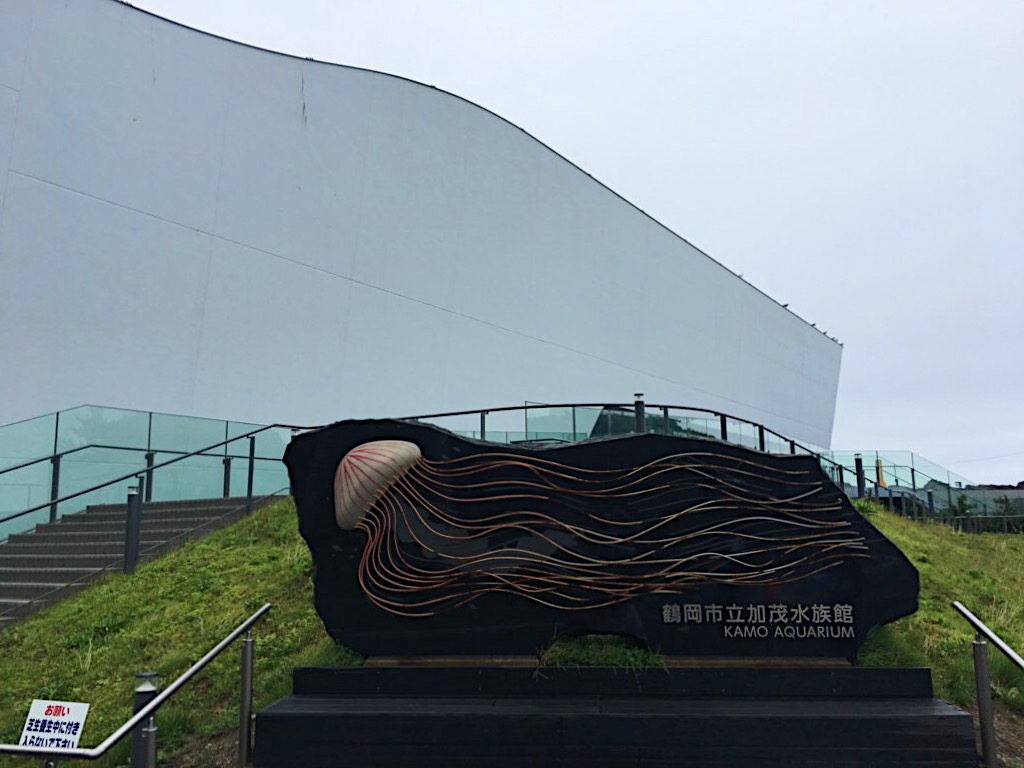 The Kamo Aquarium is a jellyfish-themed aquarium located in Tsuruoka City, Yamagata Prefecture.

The number of jellyfish on display at Kamo Aquarium is said to be the largest in the world. The symbol of the aquarium is a huge blue tank with a diameter of 5 meters in which water jellyfish swim.

When you enter Kamo Aquarium and go down the escalator, the first thing you will see is a corner displaying freshwater and saltwater fish that live in Shonai, Yamagata Prefecture.

In the large tank, there are large schools of chum salmon fry, landlocked salmon from the Mogami River, and the world’s largest species of water octopus. 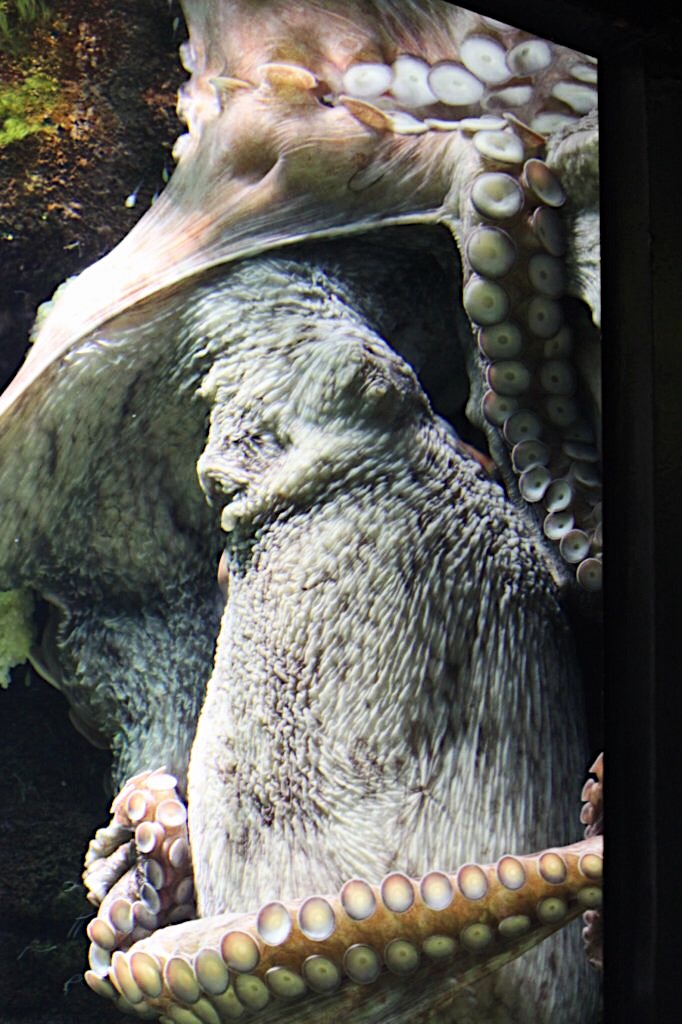 This is the world’s largest species of water octopus. It’s so big that you can no longer get a complete picture of the octopus just by looking at the tank. The water octopus grows to a length of 3 meters and a weight of 50 kilograms. 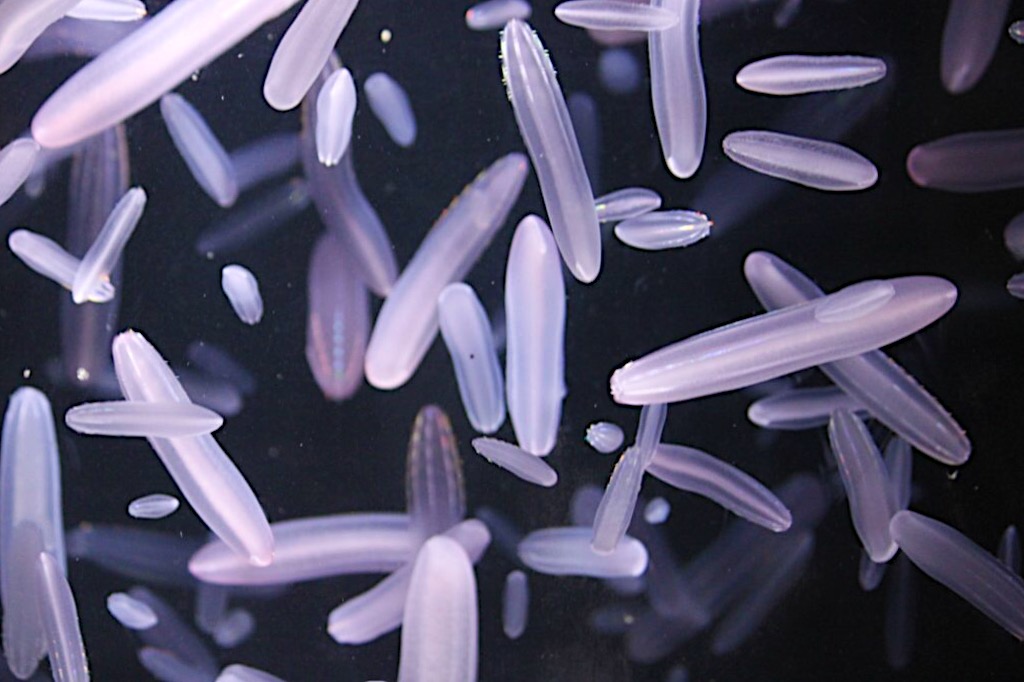 After seeing the fishes of Yamagata Prefecture, we finally arrived at the tank with jellyfish. The Kamo Aquarium calls the jellyfish exhibit corner the “kuranetarium”.

As we walked through the dimly lit corridors of the klanetarium, only the jellyfish tanks continued to roll by, bright as a spotlight.

The planetarium has a collection of jellyfish not only from Japan but also from all over the world, with more than 35 species on display at any one time.

The one in this photo is a Shinkaiuri jellyfish, which can be seen in Yamagata in spring. 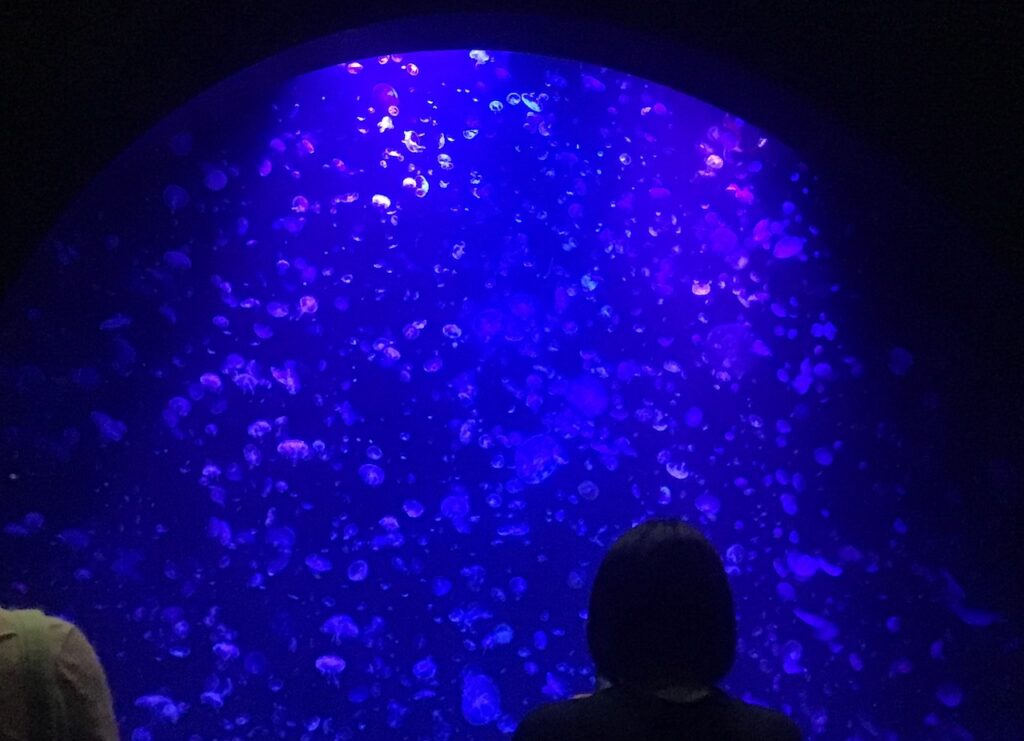 The climax of the planetarium is the Jellyfish Dream Theater, the world’s largest aquarium with a diameter of 5 meters. This large tank is home to 2,000 water jellyfish.

Inside the aquarium, you can take a commemorative photo in front of the jellyfish tank, and there is also an explanatory corner where you can learn about jellyfish, as well as learning sessions. 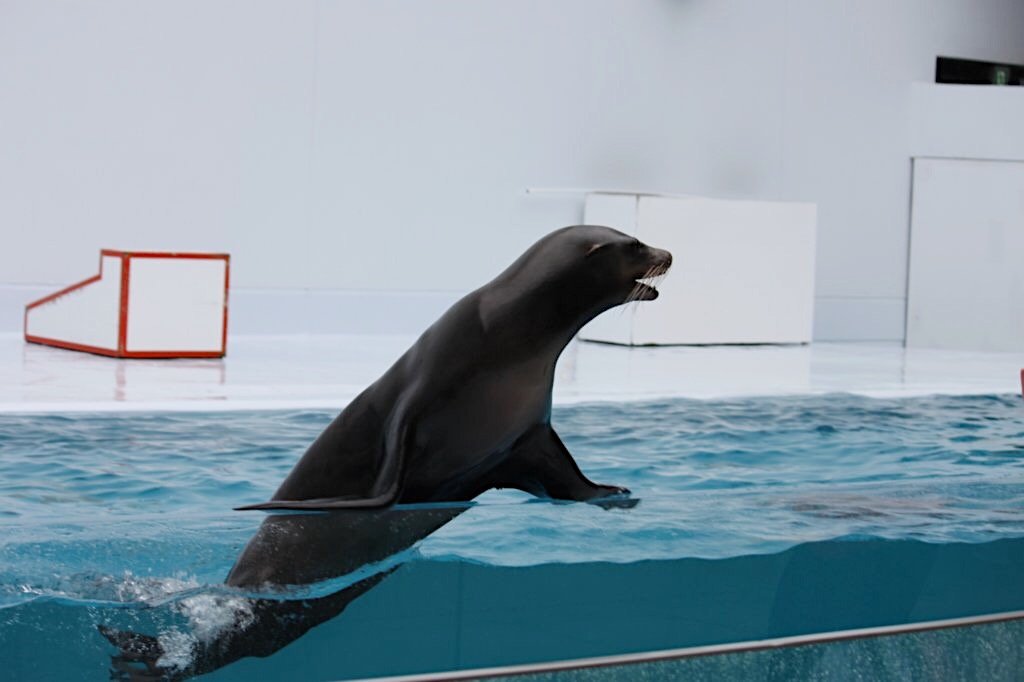 Now, after seeing a lot of jellyfish, we headed to the pool in the courtyard on the first floor.

* The program is currently on hold.

From the audience seats, we could see the performance of the large sea lions up close. The attendant gave us a detailed explanation of the characteristics and differences between sea lions and sesame seals.

After the show, you can also go to the pool where the sea lions and largha seals are and watch them swim nearby. 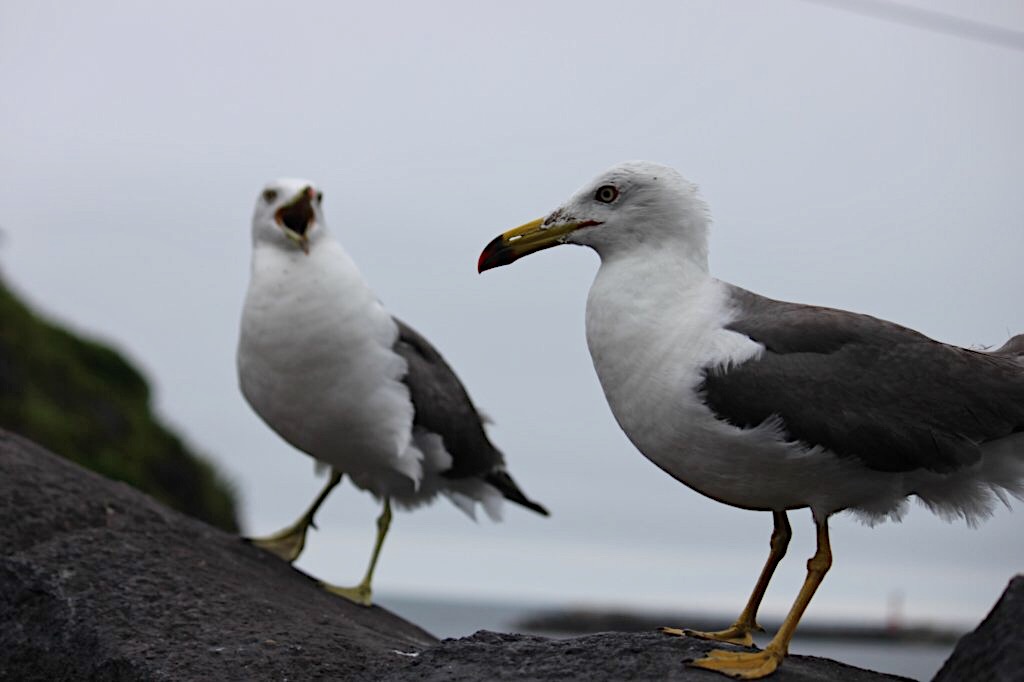 The Kamo Aquarium also holds a feeding show for the sea cats several times a day (not during the winter).

When it is time for the show, a keeper will come and give you a fish one by one, so you can feed the cats directly.

You’ll be amazed at how close you can get to the sea cats, they come right up to you.

You can also eat edible jellyfish in the museum 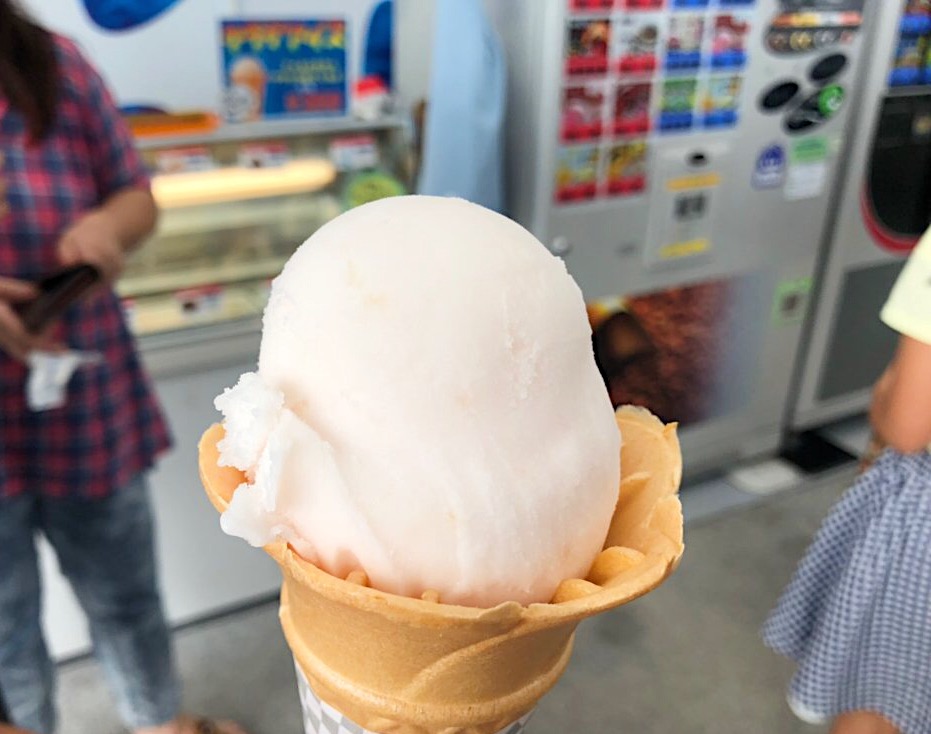 The Kamo Aquarium has a souvenir shop selling jellyfish goods and a restaurant where you can eat jellyfish.

The jellyfish itself doesn’t have any flavor, so it tastes like a normal, delicious peach sorbet.

The Kamo Aquarium also sold Yamagata’s famous tama konjac (round-shaped konjac) for 100 yen each. The flavorful Yamagata tamakonnyaku is delicious. Many people were buying them in bulk, dipping them in mustard.

Klanetarium and shows are fun!

The Kamo Aquarium is a compact aquarium, but the jellyfish-specific exhibits were wonderful. The spotlights on the jellyfish floating in the dark were as beautiful as the illumination.

I also enjoyed the Kamo Aquarium’s program to learn about sea lions and largha seals, so please check it out when it restarts.

Near the Kamo Aquarium is Dewa Sanzan, a famous worship spot in Tohoku.

Learn About Instant Noodles at the Cupnoodles Museum Yokohama!

How to Get to the Top of Mt. Misen｜One-day Hiking in Miyajima with 360-degree Views

Miyajima, one of the most popular tourist attractions in Japan, is home to a mountain that has long been an object of wo...
2021.11.04