The other day we went to the Kotohira-gu Shrine, also known as Kompira-san.

On the hillside of Mount Kotohira, overlooking the Seto Inland Sea in Kagawa Prefecture, lies the main shrine of Kompira-san. There is a long stone staircase leading up to the main shrine.

The stone steps are a challenge to climb, but as this has always been a popular place of worship, there are plenty of rest stops along the way to make your visit easier.

This article is about visiting Konpira-san and some of the places to eat along the approach.

Konpira-san is a shrine dedicated to the god of the sea, located in Kotohira-cho, Kagawa Prefecture.

Konpira-san has been attracting many visitors since the Edo period. However, in order to visit the main and okusha shrine of Kompira-san, you have to climb up a long flight of stone steps.

We parked our car at the entrance to Kompira-san’s Omotesando and continued along Nakamise-dori Street. After a short walk, you will arrive at the Ichinozaka Torii Gate. 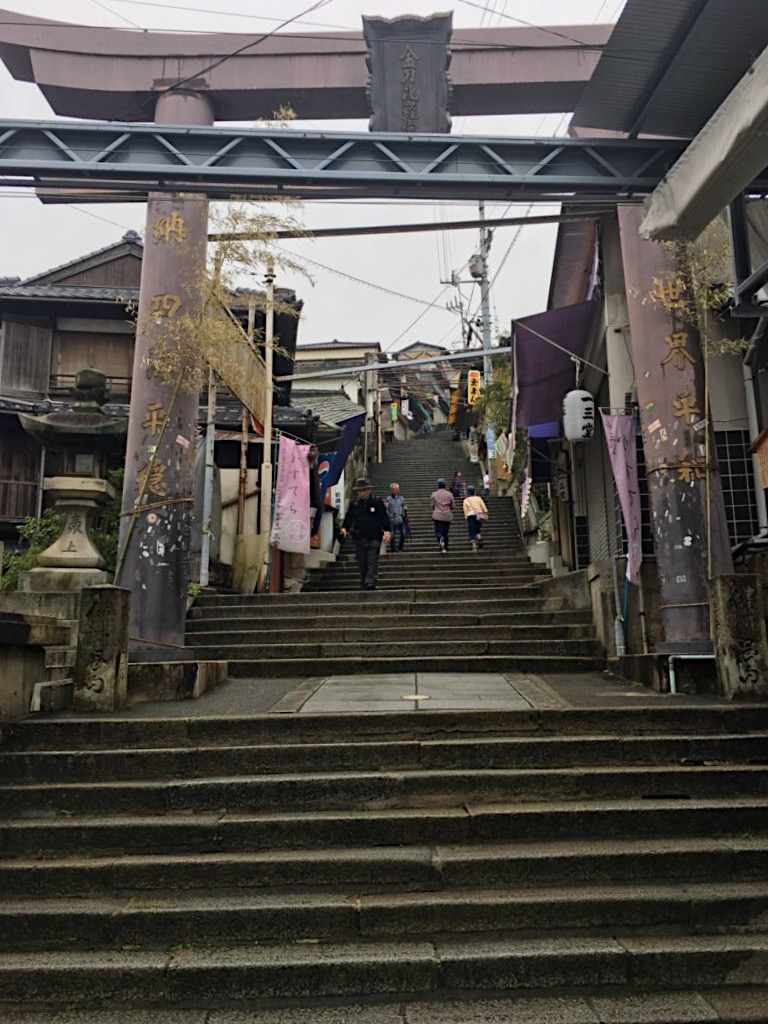 From here it’s a steep climb up the hill. As it was early in the morning, there were not many shops open on the approach.

Arrival at the Daimon gate at the entrance to the precinct 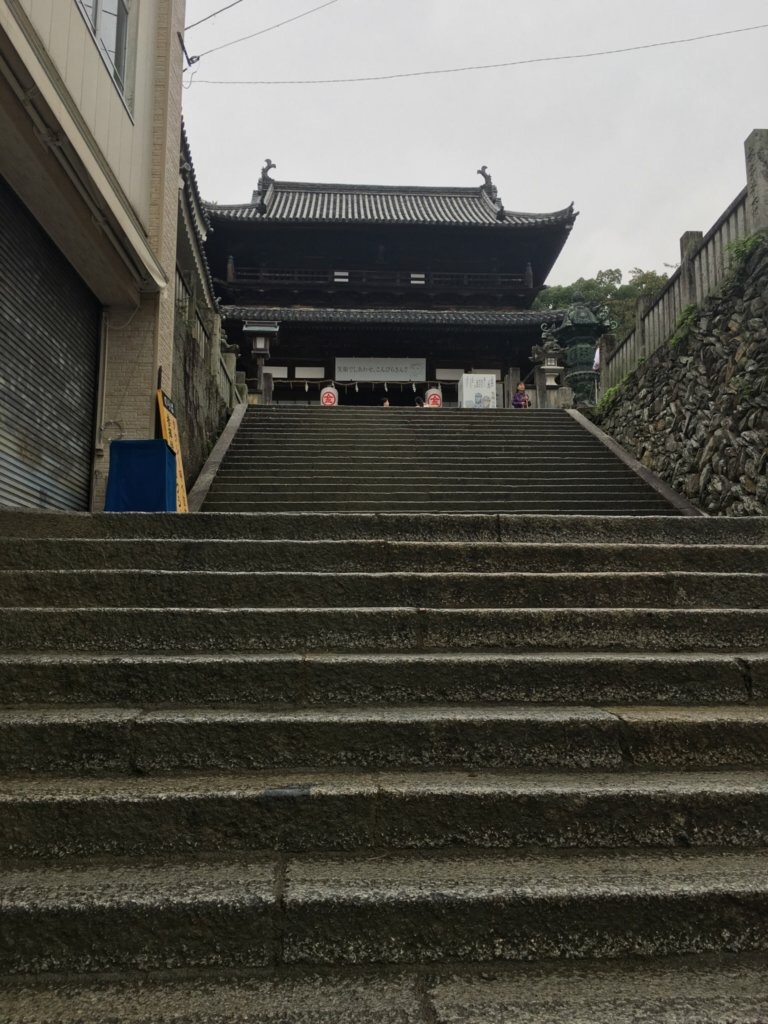 Climbing further up the stone steps, we could see the large gate at the top of the hill. 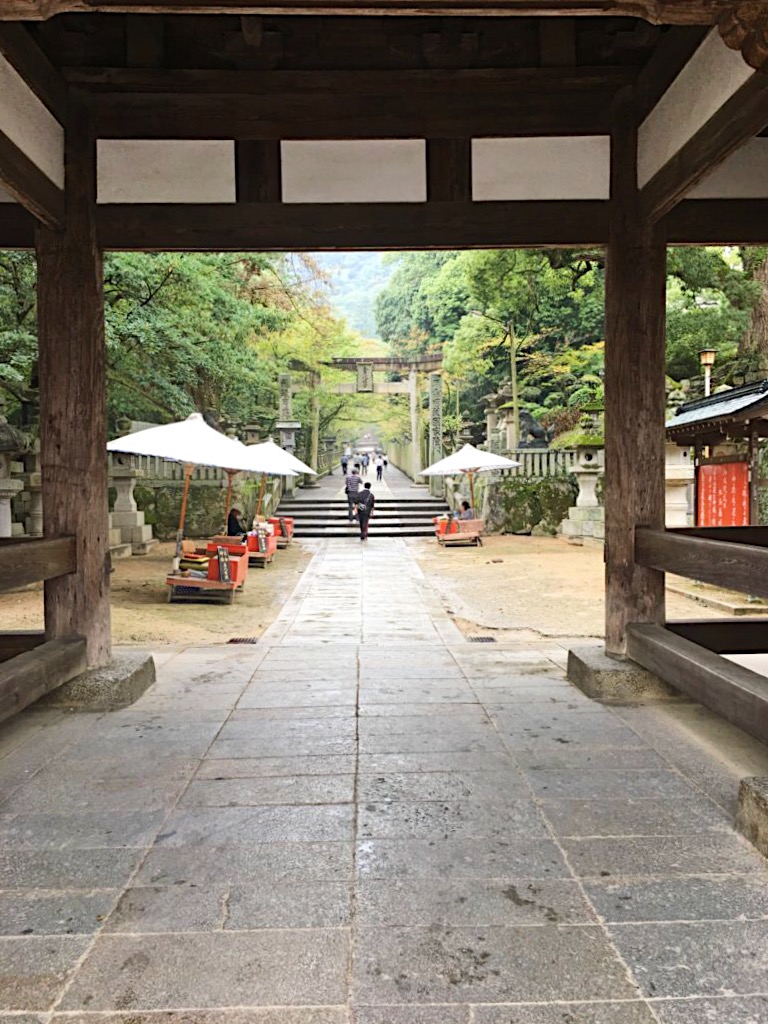 After passing through the Daimon, you will enter the precincts of Kompira-san. From here, the path is flat for a while.

The lady at the shop gave us a taste of the candy. The candy is a amber-coloured candy called “Kamiyo Ame”, which is eaten by breaking it with a small golden hammer.

I bought one to take home as a souvenir as it was simple, sweet and tasty, made from rice.

From the Asahi Shrine to the Main Shrine 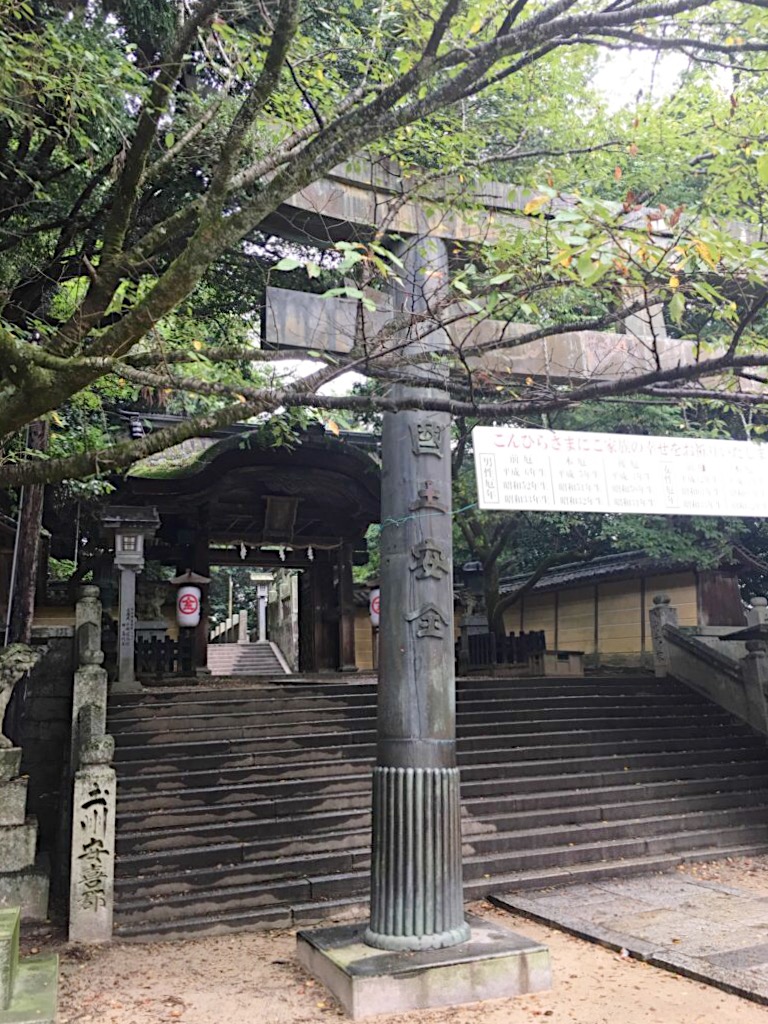 After a short walk through the precincts, we arrive at the Asahisha shrine. This is the building that used to be the Kondo, the main shrine of Kompira-san.

From the right hand side of the shrine, there is another long flight of stairs.

Pets are allowed to visit Kompira-san 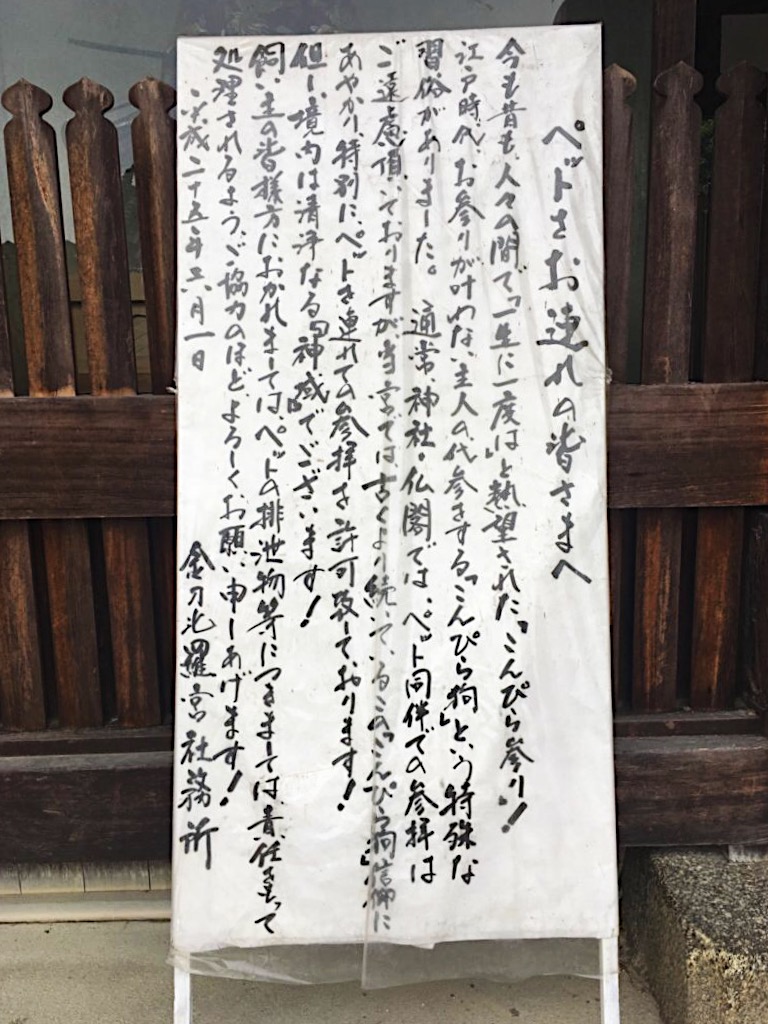 On the way to the top of the stairs, I found this sign saying “To all those with pets”.

In the Edo period (1603-1867), there was a custom called “Kompira-inu”, in which travellers were asked to take their dogs to visit the shrine in place of their owners who were unable to do so.

That’s why people are still allowed to bring their pets to Konpira-gu Shrine. 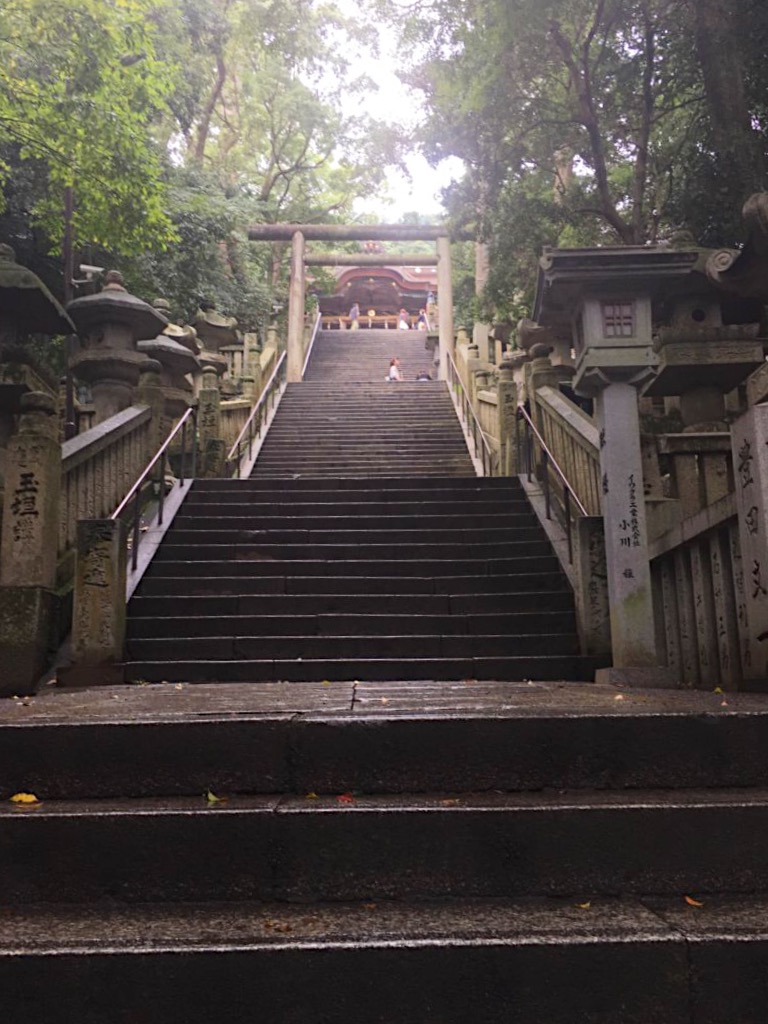 Climb these steps and you will reach the main shrine. We are almost there!

Arrival at the main shrine of Kompira-san 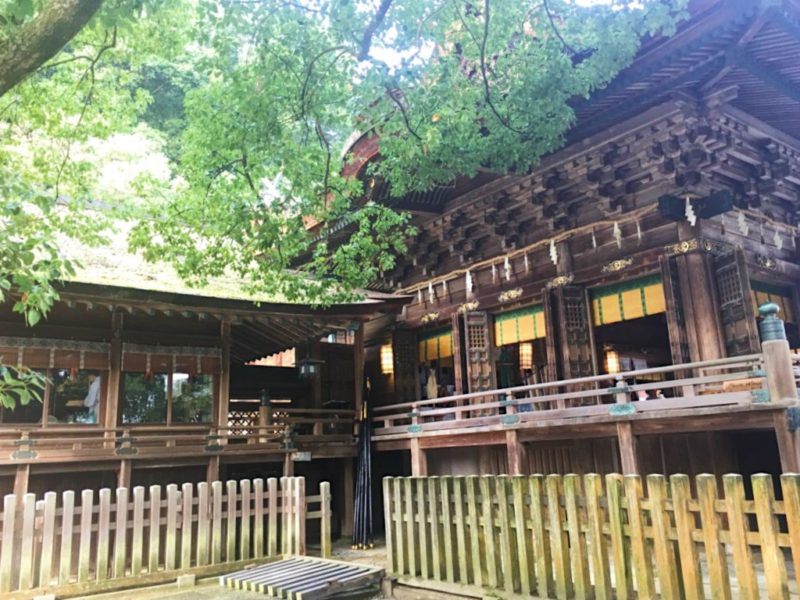 After climbing a long flight of stairs, we arrived at the main shrine of Konpira-san. From the hill, you can enjoy a panoramic view of the Sanuki Plain.

Konpira-san is dedicated as a guardian deity of the sea, and there were many votive tablets with pictures of ships. 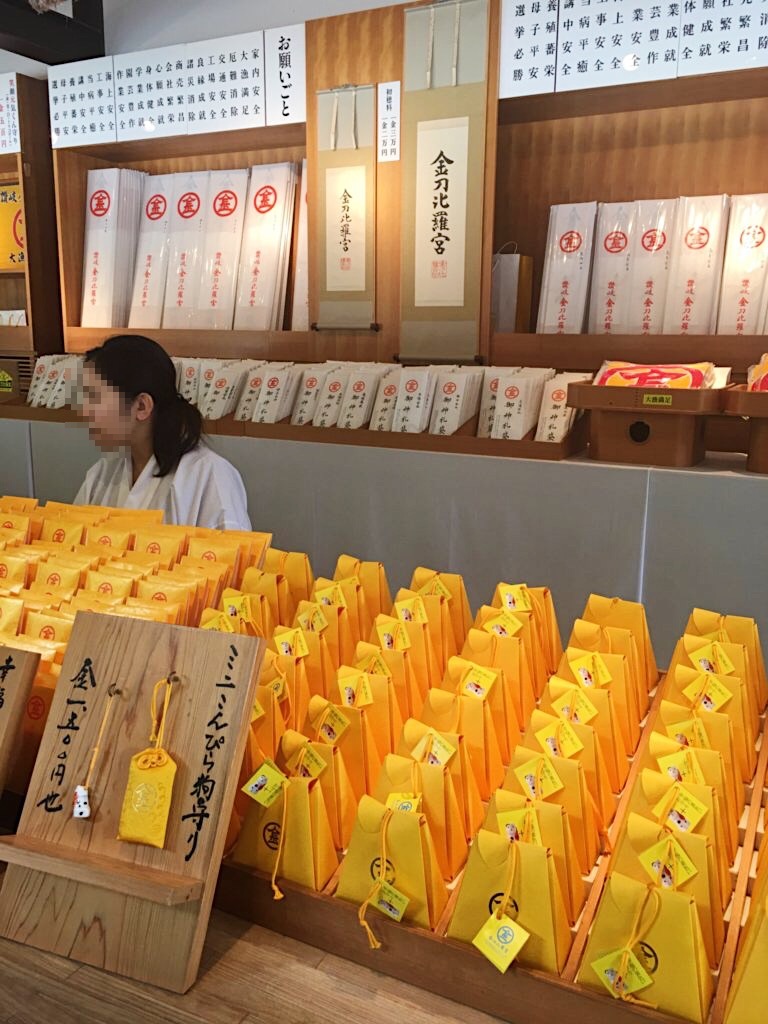 After visiting the main shrine, we stopped by Kompira-san’s Shinreijyuyo office.

The yellow amulet in the photo is called “Mini Kompira Dog Charm” and it is the most popular amulet in Kompira-san.

Many tourists were buying the amulets, hoping for better luck with money. 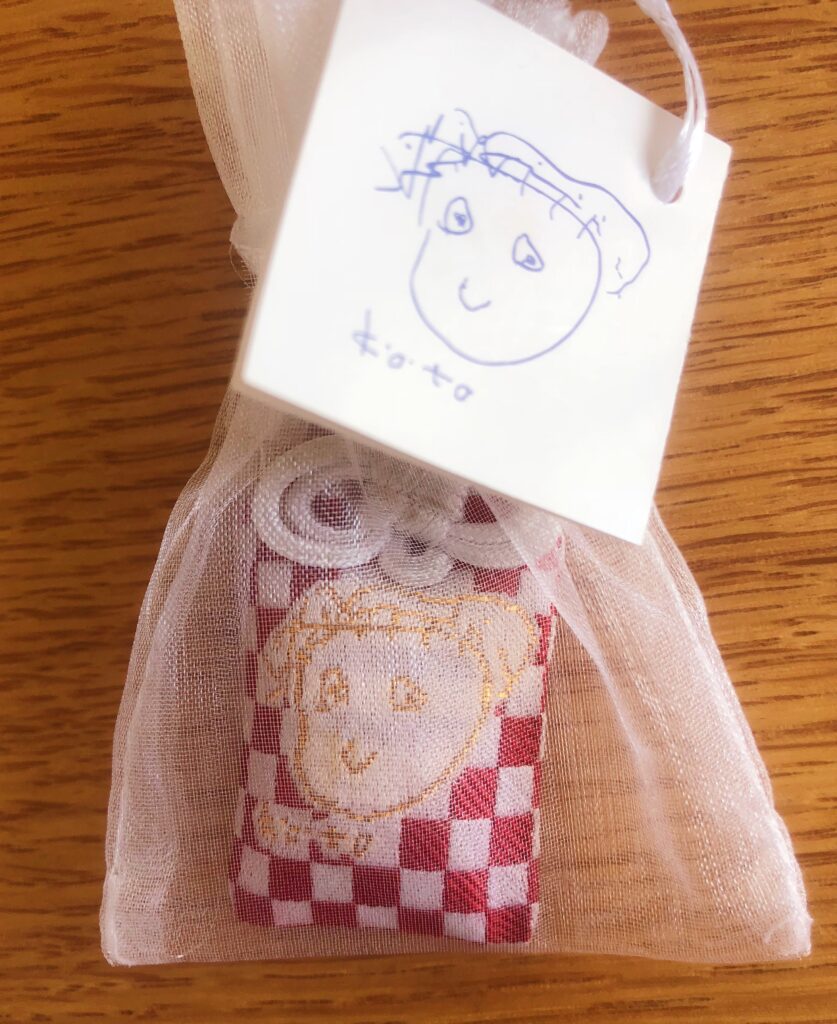 I bought this charm called “Egao Genki-kun”. Egao Genki-kun is a character amulet of Kompira, designed by the chief priest of Konpira Shrine.

The more you look at it, the more charming the picture becomes. It has now become my favourite good luck charm which I carry in my bag at all times.

We also had the red seal of Konpira Shrine written. It is a good souvenir of our visit. 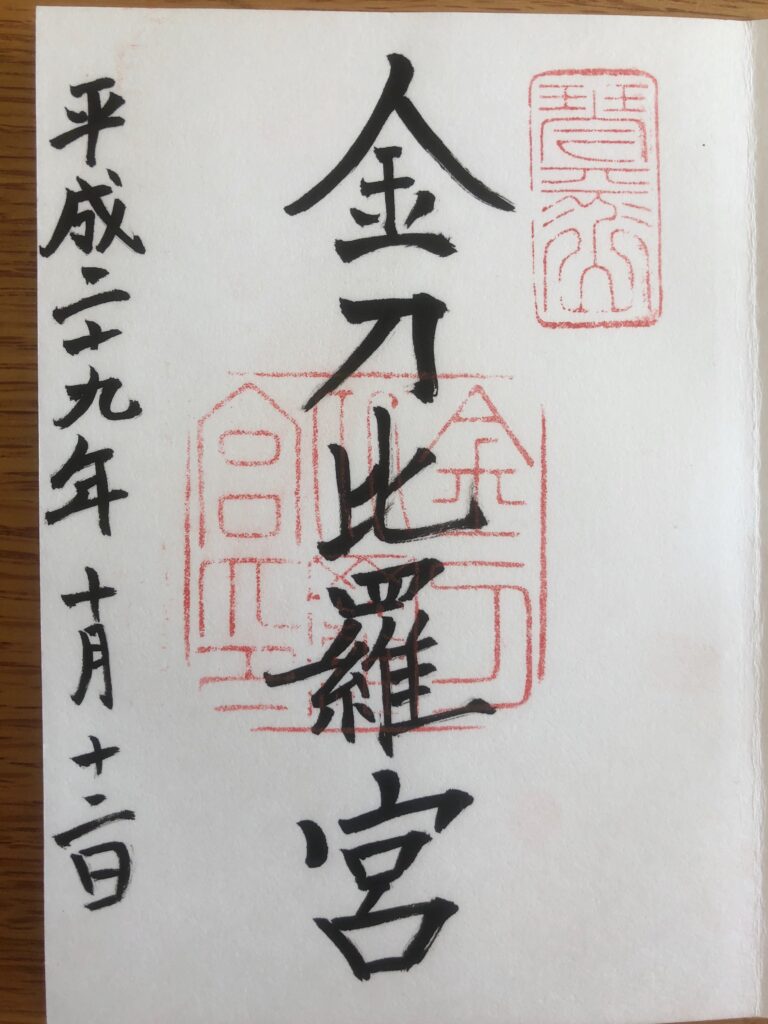 The Happiness with a smile sign will see you off on your way home. 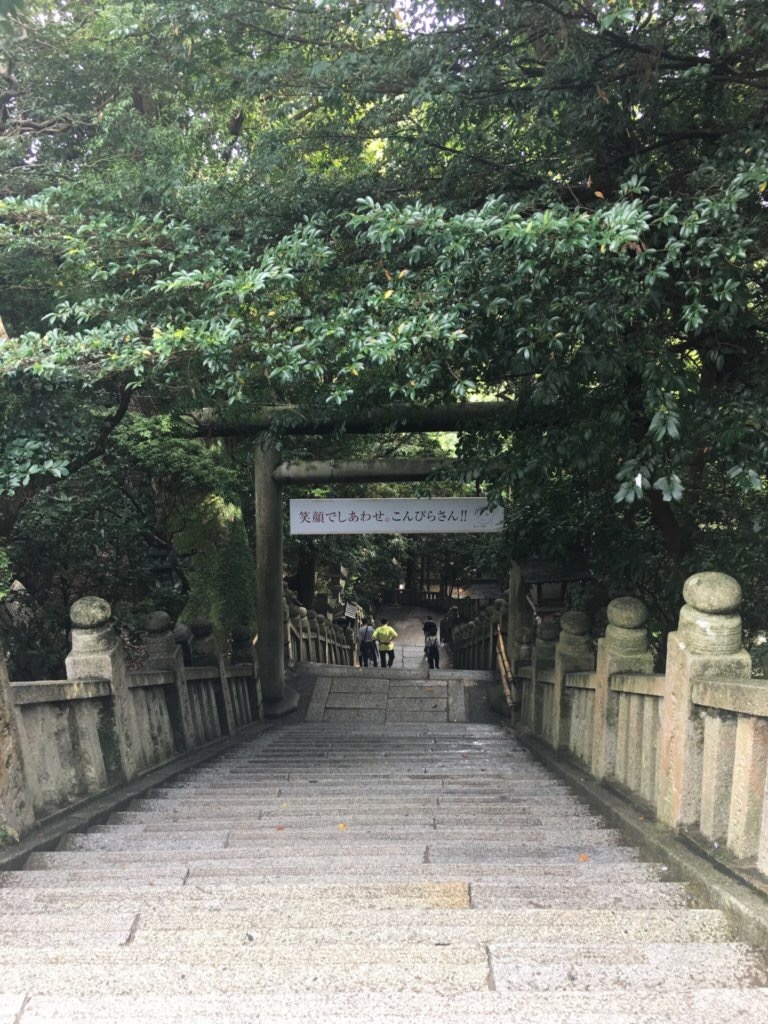 Shops along the approach of Konpira-san

Eating on the approach of Konpira-san

By the time we had finished our visit to Konpira-san, the shops along the path were just beginning to open, so we decided to drop in at a few of them. 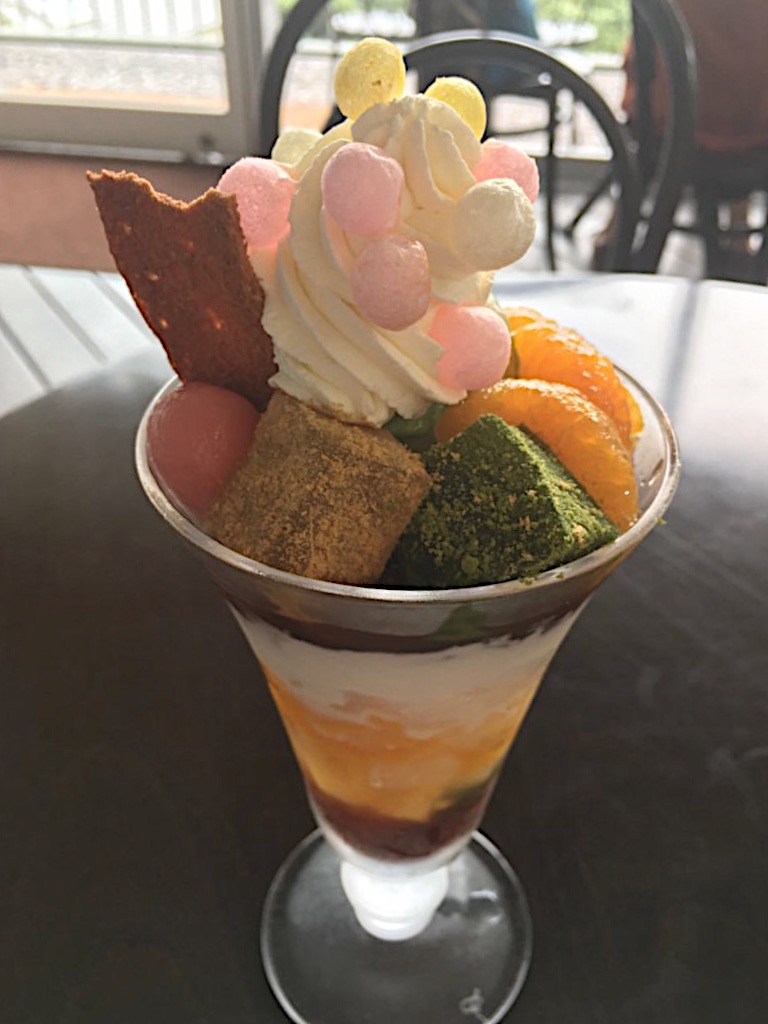 Our first stop was at Kamitsubaki, a Shiseido Parlour café-restaurant on the way down the stone steps. The most popular parfait here is the Kamitsubaki Parfait, which is a Japanese flavored parfait with warabi mochi and brown sugar syrup.

The pink, yellow and white puffy things at the top are called ‘Oiri’, which is a Sanuki rice cake snack.

Our next stop was a hand-baked rice cracker shop. 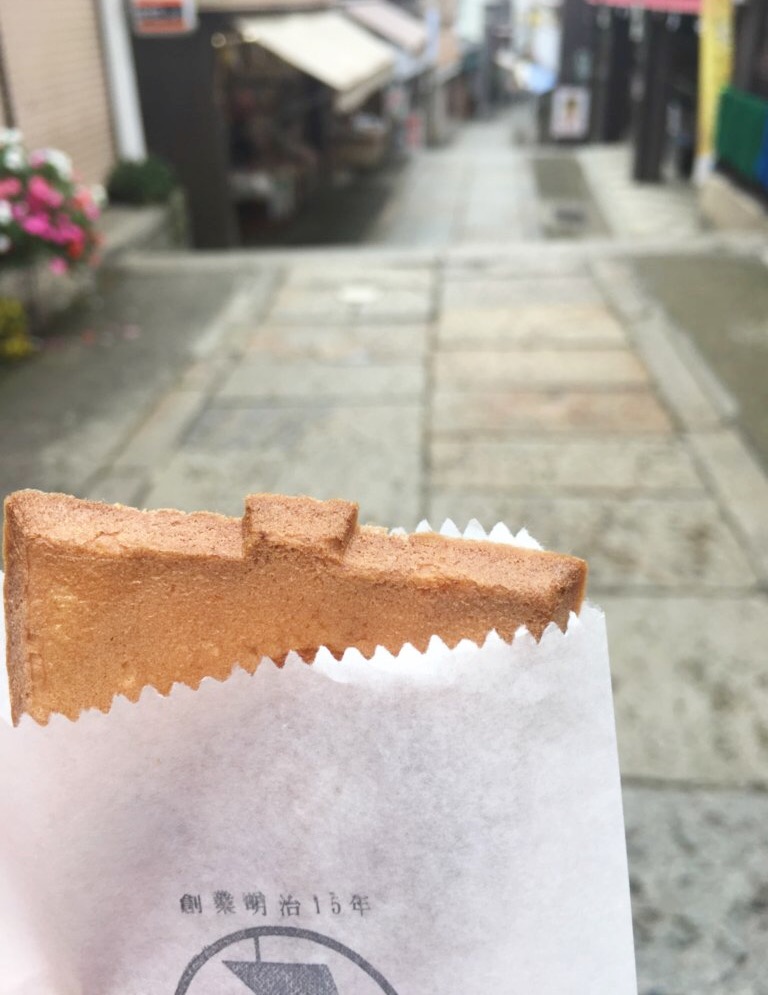 Founded in 1882, Kinokuniya’s Funa Senbei offers hard-baked rice crackers like the one in the photo, which can be bought from a single piece.

The shopkeeper gave us some freshly baked crackers. They were fragrant and delicious. 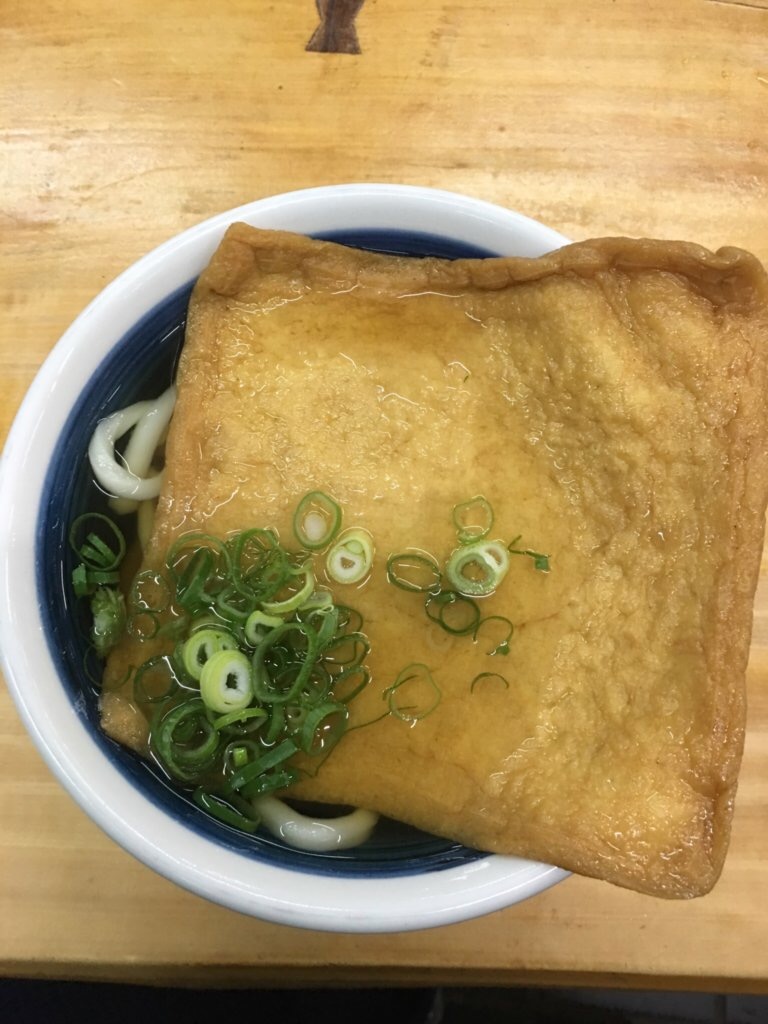 There are several Sanuki udon shops along the approach to Kompira-san. This time we went to a shop called Kompira Udon Sando. I ordered a bowl of kitsune udon (620 yen), which came with a large piece of fried tofu that was overflowing the bowl.

Sanuki udon is said to have originated from the Chinese sweets brought back from China by Kobo Daishi (Kukai), but it is also said to have its roots in the udon noodles served to worshippers at Konpira-san.

Across the street from the udon shop is Nakano Udon School, which offers a Sanuki udon making experience class.

In the class, you can make Sanuki udon by dancing and stepping on the udon dough with your feet. It seems that a lot of tourists visit here on tours. 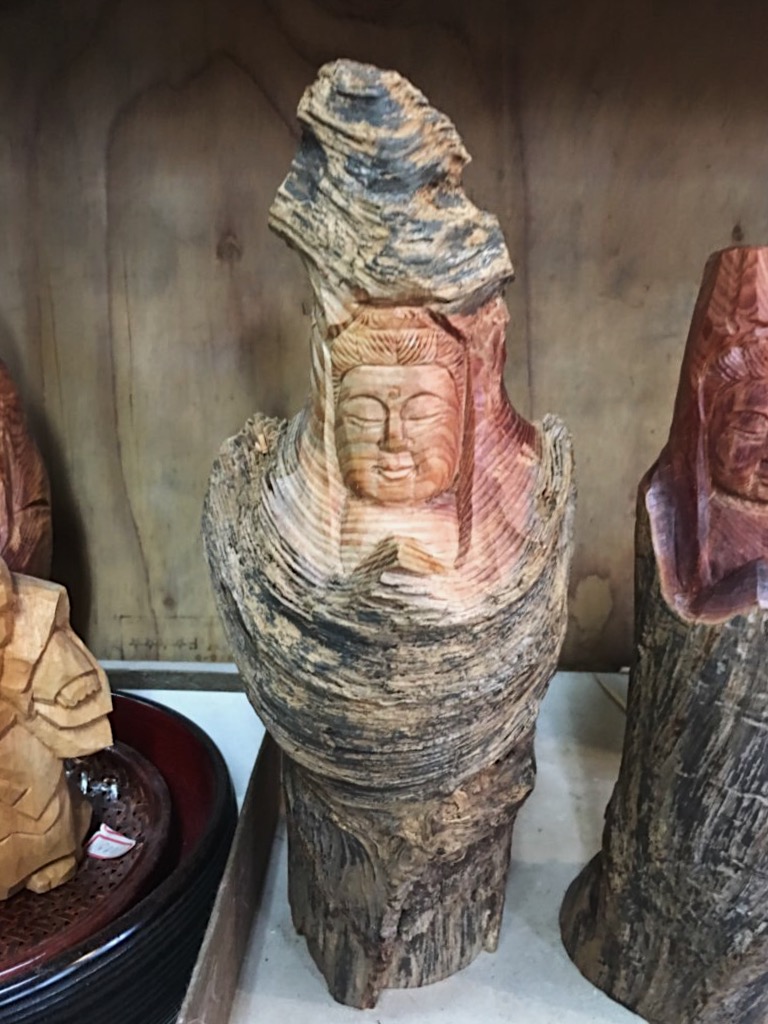 In front of the Udon School, there is a studio of Sanuki Itto-bori carving. We had a chat with the craftsman and looked at his carvings.

In the workshop, there were many Buddha statues with very good expressions on their faces.

Konpira-san and the shops along the approach

I would like to visit I Kompira-san every year

Konpira-san has been welcoming many travellers since ancient times. Some of the people who look forward to visiting Kompira-san every year are unable to climb the long stone steps to the shrine.

Even if they can’ t climb the stone stairs, some people wait for their family and friends to return, chatting with the shopkeepers in the rest area. That’s how popular the shrine is.

We had a great time at Kompira-san, visiting the shrine and eating out. I would like to try to visit the okusha shrine next time.

If you are travelling by car, it takes about one hour from Takamatsu City. The Zentsuji Interchange is 17 minutes away.

Other places to visit

At the entrance to the approach is the oldest surviving Kabuki theatre in Japan, the Kanamaru-za. On your way home, why not take a look at the Edo-period Kabuki stage?

Visit the Kanamaru-za Theatre to See How the Seri and Mawari-butai Work! Learn about the history of Kabuki
* Currently closed: October 1, 2020 to March 18, 2022 Kabuki is a traditional Japanese performing art, and there are a variety of stage sets availabl...

The Village that Produces the Most Lettuce in Japan!｜A Trip to Kawakami Village to Discover the Delights of Highland Vegetables

Nagano Prefecture is one of the most mountainous prefectures in Japan, with an average altitude of 1132 metres. This mak...
2021.11.04

Nagano Prefecture is the second largest producer of grapes in Japan, after Yamanashi Prefecture. As a result, Nagano ...
2021.11.04

In Azumino City, Nagano Prefecture, there is a wasabi (Japanese horseradish) farm called "Daio Wasabi Farm", which is th...
2021.11.04
Visit the Kanamaru-za Theatre to See How the Seri and Mawari-butai Work! Learn about the history of Kabuki
Sightseeing in Lake Megami｜Various Lakeside Activities Such as Fishing Ponds, Boating and Walking
Home
Chugoku & Shikoku
Kagawa