In mid-November we went to Miyajima in Hiroshima Prefecture. Miyajima is one of Japan’s most popular tourist destinations and is registered as a UNESCO World Heritage Site.

This time we went to Miyajima to visit Itsukushima Shrine, hike up Mt. Misen and on the way back, we ate at the shops along the path.

In this article you can find out how long it took us to visit Miyajima, including a visit to Itsukushima Shrine, as well as our recommended route.

Itsukushima Shrine was built by Taira no Kiyomori 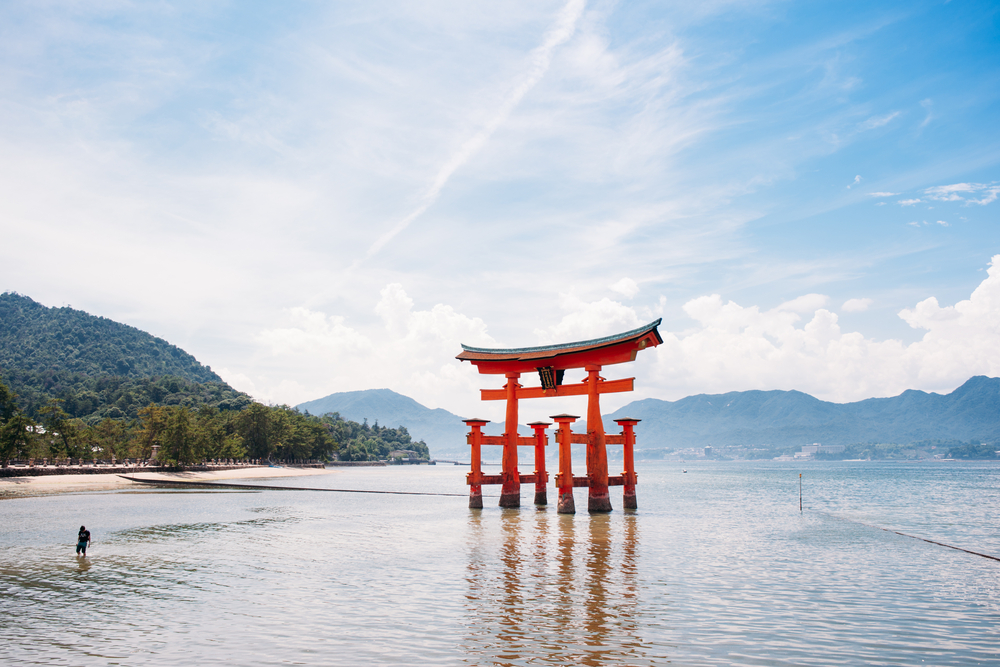 Miyajima (Itsukushima) in Hiroshima Prefecture has long been a sacred island and a place of worship.

Itsukushima Shrine, the symbol of Miyajima, was founded in 593 during the Asuka period (710-794) and the present shrine was built in 1168 during the Heian period (794-1185) by the powerful Taira no Kiyomori.

The shrine and the Otorii (Great Gate) of Itsukushima Shrine are built in the middle of the sea, where the tide rises and falls.

It is said that the shrine was built on the sea because the land on the island was sacred and buildings were not to be built on it.

Itsukushima Shrine and the primeval forest of Mount Misen are registered as World Cultural Heritage sites. The buffer zone extends over the whole of Miyajima.

Getting to Miyajima by Ferry

There are two ferry services to Miyajima

There are two ferry services to Miyajima from Miyajima-guchi Port.
JR Ferry and Miyajima Matsudai Kisen.

Whichever ferry company you choose, the journey to Miyajima takes the same amount of time and costs the same (180 yen one way), but there are some differences.

This time we bought Miyajima Misen Active Tickets to go to Miyajima.

If you pay the one-way ropeway fare, the ferry fare to Miyajima and back is practically free. This is a good value ticket for those who wish to visit Itsukushima Shrine and climb up to Mt. Misen.

There was also a set of tickets for Miyajima ropeway and boat ride with a higher discount rate. For more information, please visit the website here.

Many deer welcome us on the way to the shrine 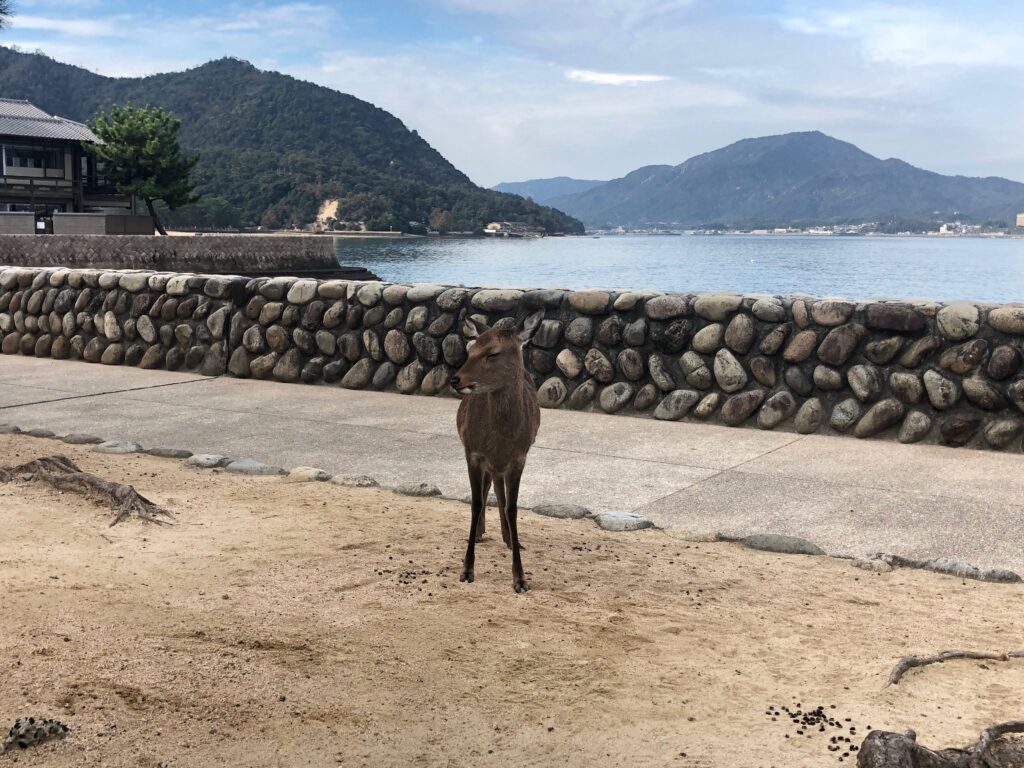 We took the 8am ferry on a weekday morning and arrived at the Miyajima pier in about 15 minutes.

After getting off the boat, we walked along the 400 metre long path to the right to Itsukushima Shrine. As it was early morning, most of the shops were still closed, but the street was already crowded with tourists.

The deer, who are not afraid of people, are welcoming tourists.

Otorii (Great Gate) on the sea 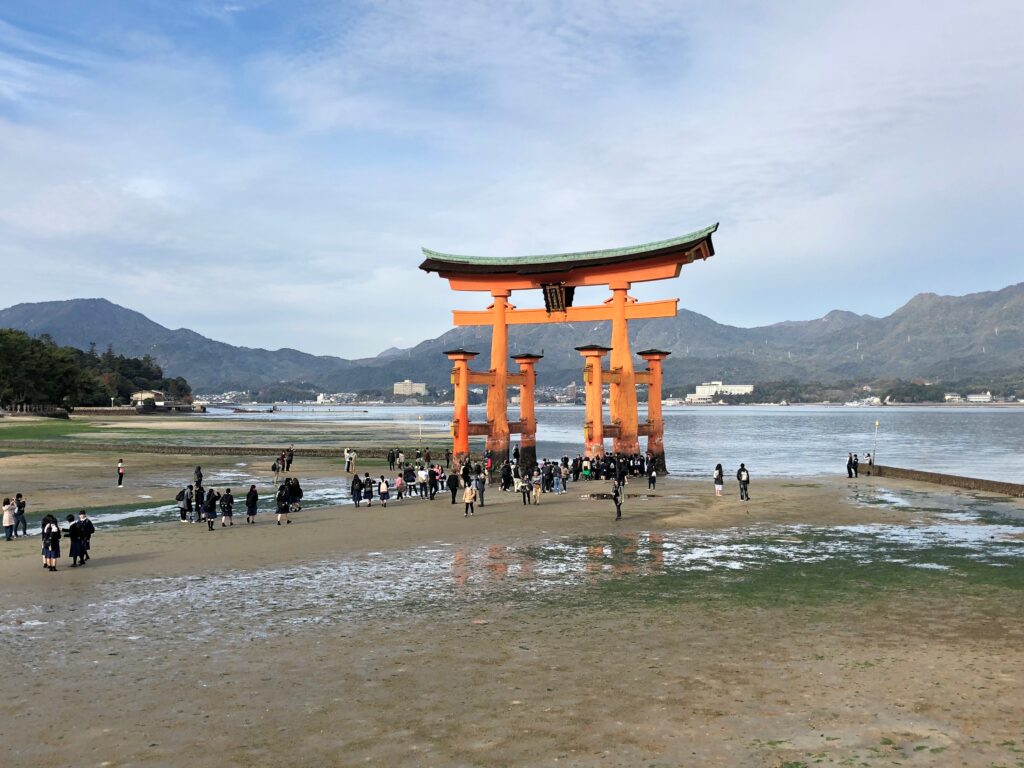 After passing through the stone torii gate, the first thing we saw was the vermillion torii gate of Itsukushima Shrine, which stands on the sandy beach.

It was low tide and there was no sea water, so everyone was drawn towards the red wooden gate.

As its name suggests, the Otorii is a huge symbol of Itsukushima Shrine. The current Otorii is the eighth generation, built 143 years ago, and is 16 metres high and weighs 60 tonnes.

It was said that stones were also laid in the crossbeams so that the weight of the torii alone would enable it to stand in the sea.

After visiting the Otorii (Great Gate) to the fullest, we will enter Itsukushima Shrine to visit the main shrine.

Itsukushima Shrine’s main shrine is built in the same architectural style as the houses of the nobility of the Heian period (794-1185), called Shinden-zukuri, and like the Torii, it is built in the middle of the sea.

The corridors of the shrine have small gaps in them to allow the sea water to escape when it rises to the floor.

A scene of cleaning blue-green algae from the grounds 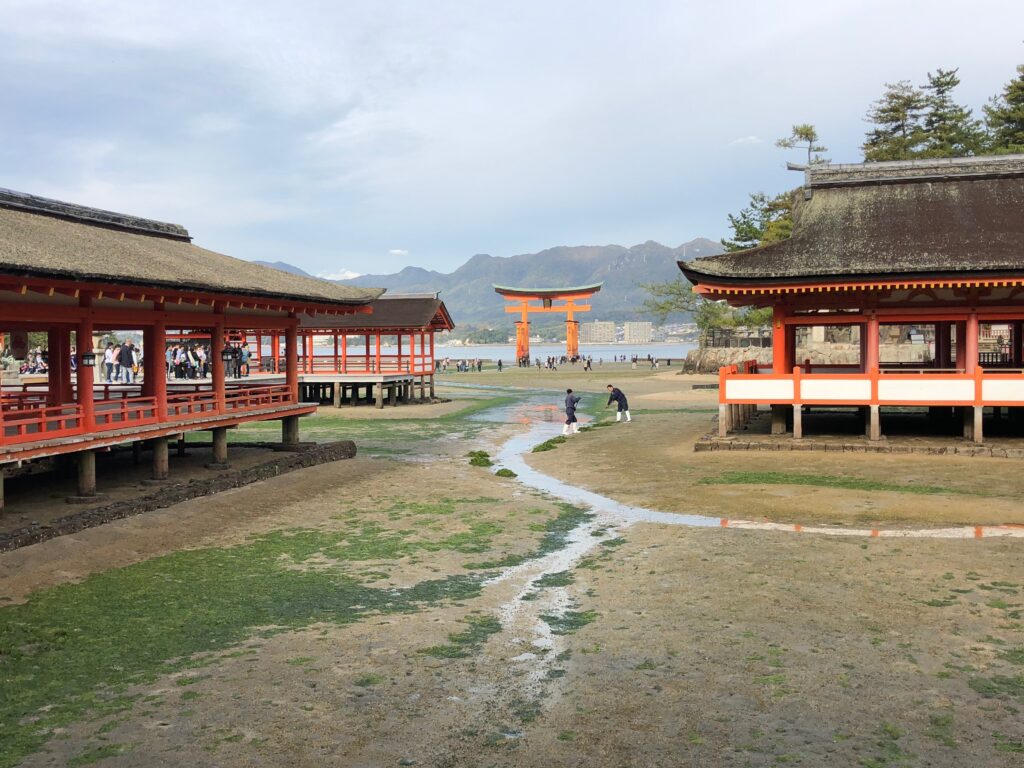 The pillars, which are immersed in seawater, inevitably get damaged, so they are regularly inspected and replaced using a method known as root splicing.

As we walked along the corridor, we saw some shrine workers cleaning up the aosa (a type of seaweed). This is a unique sight in Itsukushima Shrine, which is floating on the sea. It must be a very difficult job as it is done every day.

Dancing on a high stage, which has been performed since the Heian period 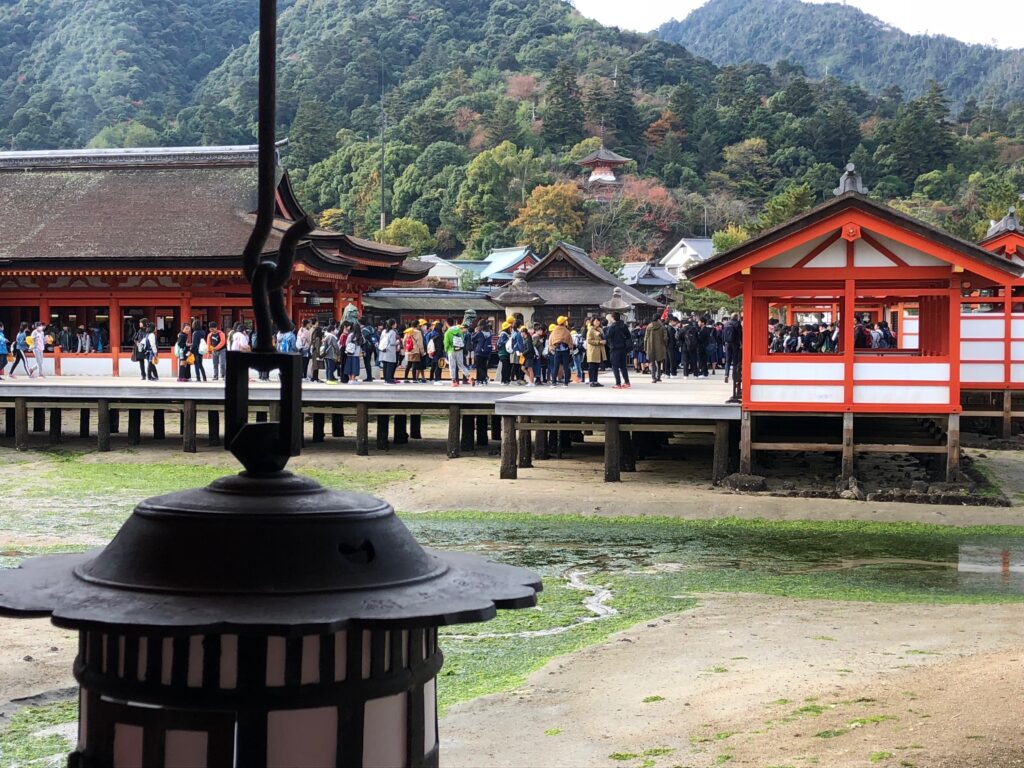 After purifying ourselves at the Temizusha, we visited the main shrine, which is dedicated to the three female deities of the sea, and received a red seal at the awarding office.

After that we walked to the high stage in the centre of the shrine. The Takabutai is a place where dances are performed with musical instruments.

In the late Heian period (794-1185), Taira no Kiyomori invited the imperial family and nobility to Itsukushima for a spectacular event. At Itsukushima Shrine, dances are performed several times a year to preserve the culture of that time.

View from the High Stage of Itsukushima Shrine

The high stage of Itsukushima Shrine is situated in an open space and offers a 360-degree view of the surrounding area, with the Otorii (Great Gate) 200 metres away and the five-storey pagoda and the Toyokuni Shrine, associated with Hideyoshi Toyotomi, called Senjyakaku, on the right. Behind the main shrine rises Mount Yayama.

We then walked past Tenjinsha Shrine, dedicated to Sugawara Michizane, the god of learning, and the Noh Theatre before heading towards the exit.

After Itsukushima Shrine, hike to Mt.Misen

After visiting Itsukushima Shrine, we went hiking to Mt. Misen. You can read about our hike and the view from the top of the mountain here.

How to Get to the Top of Mt. Misen｜One-day Hiking in Miyajima with 360-degree Views
Miyajima, one of the most popular tourist attractions in Japan, is home to a mountain that has long been an object of worship. The view of the Seto I...

It was 1.30pm, a little after noon, when we descended from Mt. So we returned to Itsukushima Shrine just as the sea water was beginning to flow into the shrine grounds.

We took a video here, if you want to see it.

From here the tide rises until it reaches high tide at around 4pm, when you can see the shrine floating in the sea. The incoming and outgoing tides change approximately every 6 hours, so you can enjoy both views during a day of sightseeing at Miyajima.

On the way home, we ate at a shop on the approach

On the way back we ate oyster dishes at a restaurant on the approach and bought some momiji manju as a souvenir.

The total time required for this trip to Miyajima is as follows. It includes break time.

If you want to visit Itsukushima Shrine, hike up Mt. Misen and eat, you should expect to spend about 6 hours.

2. If you only want to visit Itsukushima Shrine and eat along the approach

In case 2, it should take about 2.5 to 3 hours to visit Itsukushima Shrine, the surrounding historical sites and the food along the approach.

Miyajima has a lot to offer

Most people come to Miyajima to visit Itsukushima Shrine, but if you have time, we recommend you to visit the top of Mt. Misen.

Even if you can’t climb to the top of the mountain, the view from the Shishiiwa viewing platform near the exit of the Miyajima Ropeway alone is spectacular.

Although we focused our visit on Itsukushima Shrine and climbing Mt. There is so much more to Miyajima that we couldn’t see it all in one day.

You can also read more about popular tourist attractions around the country.

How Long Does It Take to Visit Otsuka Museum of Art? ｜Tips on How to Get Around The Museum

The Otsuka Museum of Art in Tokushima Prefecture is home to more than 1,000 ceramic panels of famous paintings that ever...
2021.11.04

Wherever you go in Japan, you'll find an aquarium. This is because Japan is the country with the largest number of aquar...
2021.11.04

There are times when you want to go for a walk on your day off to get rid of your lack of exercise. However, it often ha...
2021.11.04
Highlights of Himeji Castle｜Beautiful White Egret Castle with Traps Everywhere
How to Get to the Top of Mt. Misen｜One-day Hiking in Miyajima with 360-degree Views
Home
Chugoku & Shikoku
Hiroshima