Miyajima, one of the most popular tourist attractions in Japan, is home to a mountain that has long been an object of worship.

The view of the Seto Inland Sea from the top of this mountain is spectacular and always attracts many tourists.

This article describes our hike to the top of the Mt. Misen.

Climbing Mt. Miyajima in the heart of the island

Using the Miyajima ropeway for the ascent

On this day, after an early morning visit to Itsukushima Shrine, we decided to hike to Mt. Misen.

There are several climbing routes to the top of Mt. Miyama, but this time we will take the Miyajima ropeway to the mountainside and walk down the trail on the way back.

To Momijiya Station, the starting point of the Miyajima Ropeway

From the exit of Itsukushima Shrine, it is a 16-minute walk to the Miyajima Ropeway stop.

Momijidani Station, the departure point for the Miyajima Ropeway, is located at the end of Momijidani Park.

There is a free shuttle bus service from the entrance of Momijidani Park to the station, but as there are signs everywhere pointing the way to the station and many people heading in the same direction, you should be able to reach the station on foot without getting lost.

We have arrived at Momijidani station. From here we will take the ropeway.

We took the 8-seater ropeway from Momijidani Station to Kayatani Station for 10 minutes. The ropeway took us up to the top of the mountain with a view of the primeval forest of Mt. Misen. 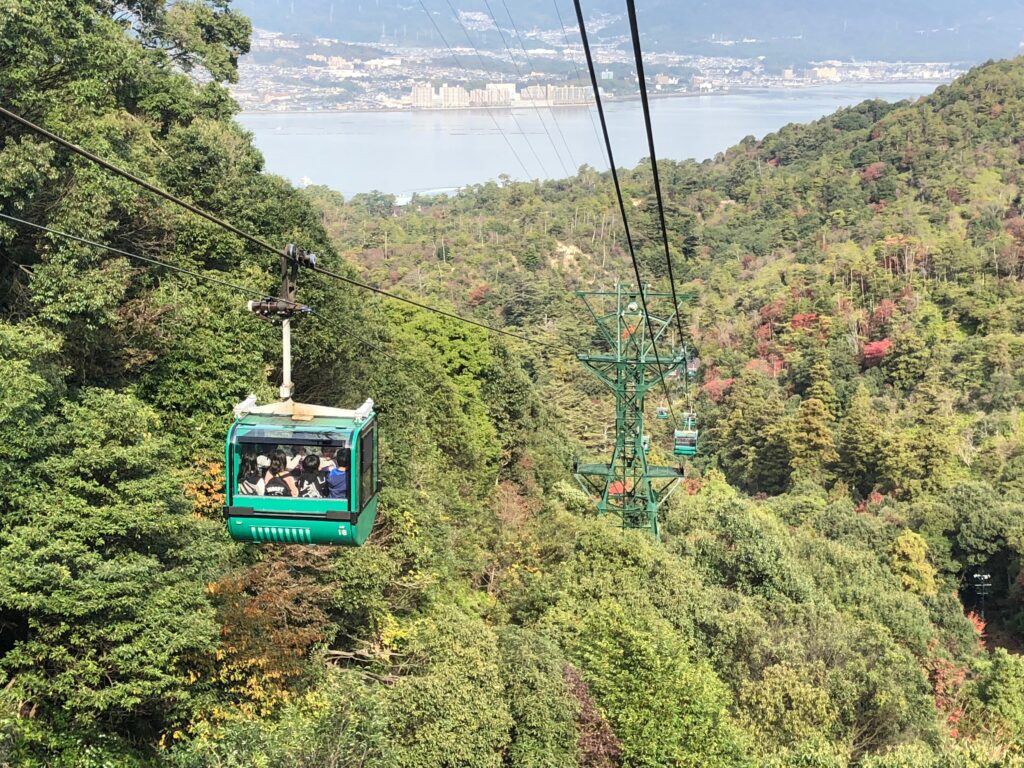 Looking at the autumn leaves changing color from our seats in the car, we were glad that we had taken the ropeway instead of walking up the steep mountain path.

On the way to the mountain, we changed to another 30-seater ropeway at Kayatani station and headed to “Shishiiwa” station. The ride takes 4 minutes.

I took a video of the view of the Seto Inland Sea from the ropeway window. Please take a look if you like.

To capture the seaward view, it is best to take the left-hand side of the ropeway.

After arriving at Shishiiwa Station, the last stop on the Miyajima Ropeway, we headed for the Shishiiwa Observatory.

The view of the Seto Inland Sea that we saw from the ropeway was even more breathtaking.

The Seto Inland Sea is dotted with islands lined with oyster rafts for aquaculture. Hiroshima Prefecture is the largest producer of oysters in Japan.

Heading for the summit

Now it’s time to walk to the top of Mt. Misen.

Departing from Shishiiwa station, the first 7 minutes are downhill, followed by 23 minutes of uphill mountain path. When the road turns into an ascent, the pace slows down quickly.

After 13 minutes we arrived at the square where the main hall and the Reikado are located.

The mountain was founded by Kukai (Kobo Daishi). The statue of Kukai is enshrined in the main hall of the mountain, and opposite to the main hall is the Reikado, where the goma (unquenchable fire) that Kukai lit during his asceticism has been burning for 1200 years.

Sanki-do, the shrine of the ogre god

At the top of the square there is a hall called Sankido, where the god of ogre is worshipped. Around the hall, you can see some mischievous looking Jizo statues.

Passing through the huge stones to the summit of Mt. Misen 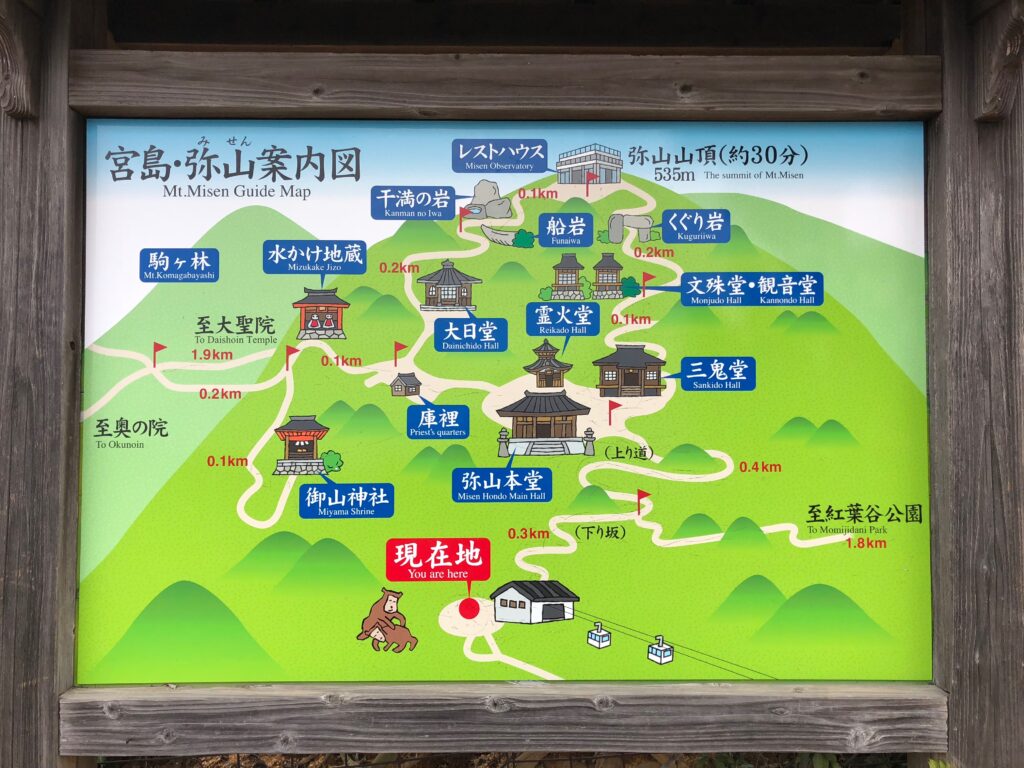 Climbing slowly up the stone steps beside Sanki-do, we came to a huge rock called Fudo-iwa.

Next to the stone called Kuguri Iwa, we waited for the descending climbers to clear the way, and they told us that the summit was just around the corner.

Arriving at the summit of Mt. Misen

View from the summit

It took us half an hour from the end of the ropeway to reach the summit of Mount Misen. The summit area was open and full of climbers. A large rest house was built in the middle of the mountain, and from the observation platform at the top we could enjoy a 360 degree view.

The large terrace on the second floor of the rest house is a great place to eat your lunch. This time we brought our own drinks and snacks and took a break.

After enjoying the view for a while, we decided to go down the mountain.

There are three ways to walk down from Mt. Misen

To descend from the top of Mt. Misen on foot without using the ropeway, you must first return to the square where the main hall is located, and then choose one of the following three routes.

* The ascent takes approximately twice as long as the descent.

Of the three courses, the Momijidani course is suitable for beginners, the Daishoin course has many stone steps, and the Ohmoto course is a longer walk through a primeval forest.

This time we decided to take the Daishoin course, as we were told that the views were better on the way down.

Descend on the Daishoin course 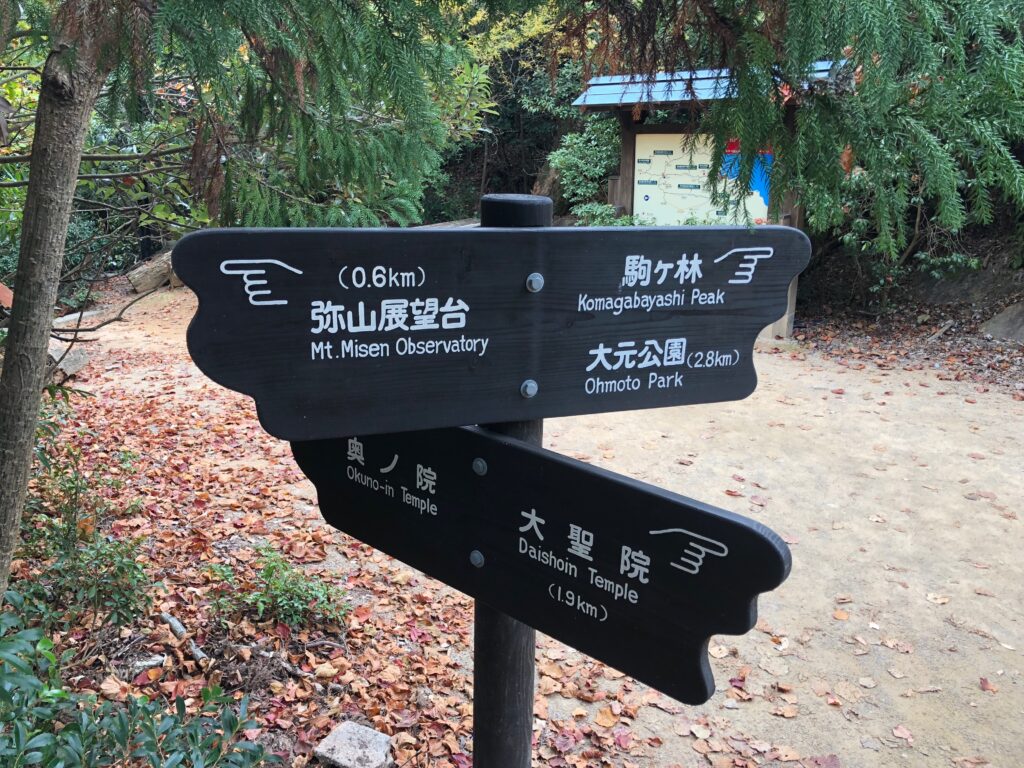 The Daishoin course we took on our descent was a continuous stone path from start to finish. The steps are narrow in places and you need to be careful not to fall down.

There was also a rest point on the way where we could see the red Otorii gate of Itsukushima Shrine, and the view from here was spectacular.

After an hour’s walk from the top of Mt. Misen, we arrived at our goal, Daisho-in Temple. Daishoin is the head temple of the Omuro sect of Shingon Buddhism and houses the eleven-faced Kannon Bodhisattva.

After this, we visited Itsukushima Shrine again and had a bite to eat at one of the shops along the path before heading home.

Summary of the hike to the summit of Mt. Misen

A spectacular view you have to see at least once

The view of the Seto Inland Sea from the top of Mt. Misen was a spectacular sight to behold. If you have time to spare after visiting Itsukushima Shrine, why not consider visiting Mt. Misen?

Other places to visit in Miyajima

For more information on Miyajima’s other attractions, read this article.

Time Required to Visit Itsukushima Shrine｜Recommended Walking Course in Miyajima Island
In mid-November we went to Miyajima in Hiroshima Prefecture. Miyajima is one of Japan's most popular tourist destinations and is registered as a UNESCO ...

Sanjo City in Niigata Prefecture has long been known as a town of hardware manufacturing. In the suburbs of Sanjo City, ...
2021.11.04