n Nikko City, Tochigi Prefecture, there is a shrine called Nikko Toshogu, which is dedicated to Ieyasu Tokugawa, the first shogun of Edo period.

Futarasan Shrine, Rinnoji Temple, and the mountain forest around the shrine are both registered as UNESCO World Heritage sites.

This article introduces Nikko Toshogu Shrine, where Tokugawa Ieyasu’s tomb is located, and its highlights.

Nikko has long been a sacred place for mountain worship, with Mt. Nantai (another name for Futarasan) under the patronage of the Minamoto clan, the mountain was worshipped by the samurai.

Ieyasu Tokugawa, the first shogun of Edo period, left a will that he wanted to watch over the Shogunate from Nikko after his death, and was honored at Nikko Toshogu Shrine.

Iemitsu himself is enshrined at Rinnoji Temple in Nikko, a five-minute walk from Toshogu Shrine. 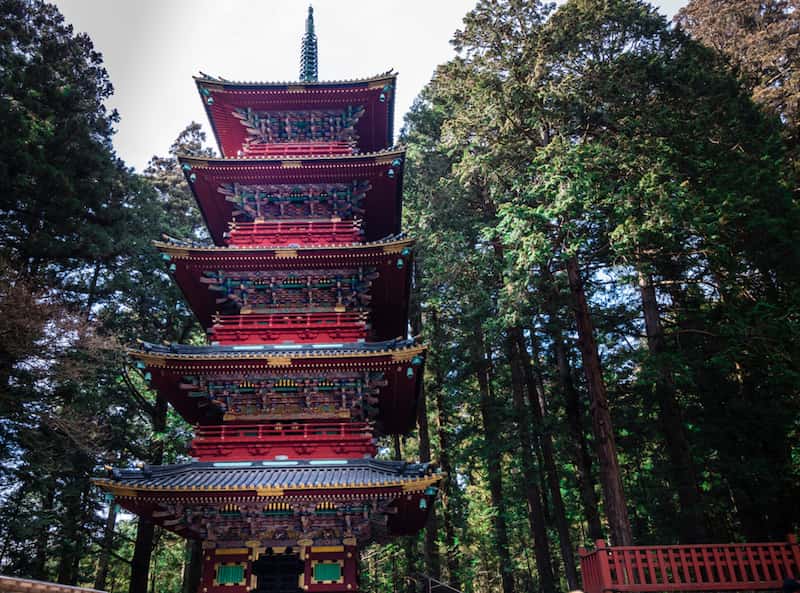 After passing through the stone torii gate and walking down the street to the front gate, you will see the colorful five-story pagoda on your left.

The five-story pagoda of Nikko Toshogu is 36 meters high and is designated as an important cultural property. 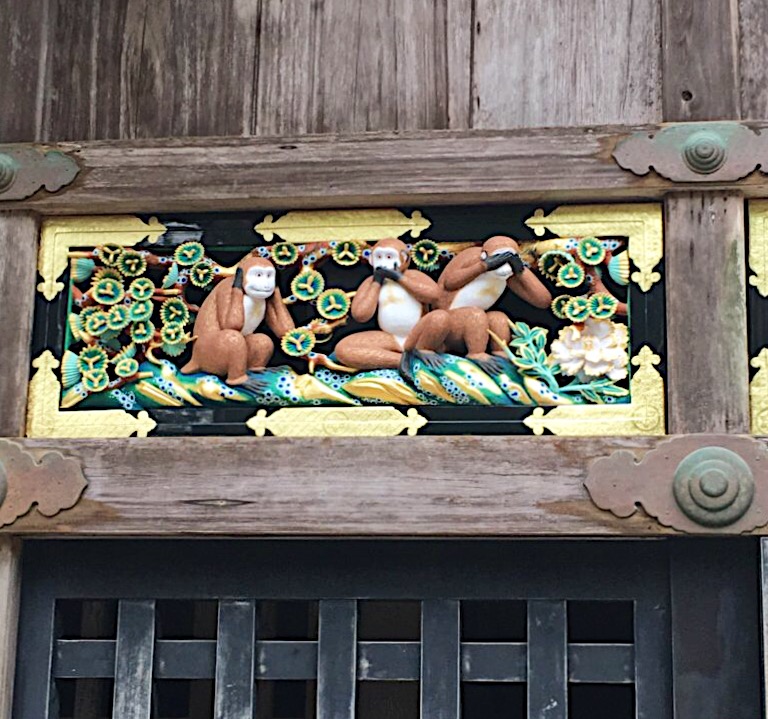 After paying the entrance fee and passing through the front gate of Nikko Toshogu, you will first come to a square with three Shinto vaults, a Shinkyu-sha stable, and a Omizuya.

The Shinkyu-sha stable is where the horses of the gods are kept.

The five-story pagoda in front of the front gate alone is a conspicuous enough building, but once you enter the front gate of Toshogu, an even more glittering world opens up before you.

As far as the eye can see, there are brightly colored sculptures carved into the buildings of the shrine.

Among the sculptures of Nikko Toshogu Shrine, the sculpture of the three monkeys, “see no evil,” “hear no evil,” and “speak no evil,” in the Shnkyo-sha stables are the most famous. 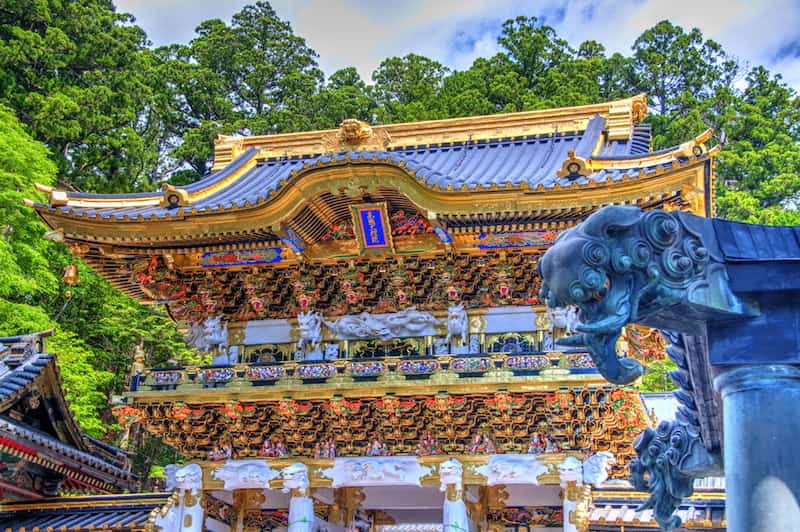 The Yomeimon Gate, which is said to be the most gorgeous and ornate in Nikko Toshogu, has a total of 508 carvings of imaginary animals and figures.

The Yomeimon Gate is called the “Higurashi-no-mon” because one could look at it until sundown and never get tired of it.

After passing through the Yomeimon gate, you will see the main shrine. To visit the shrine, you must first take off your shoes, enter the hall of worship, listen to a talk by the priest of Toshogu, and then visit the main shrine. 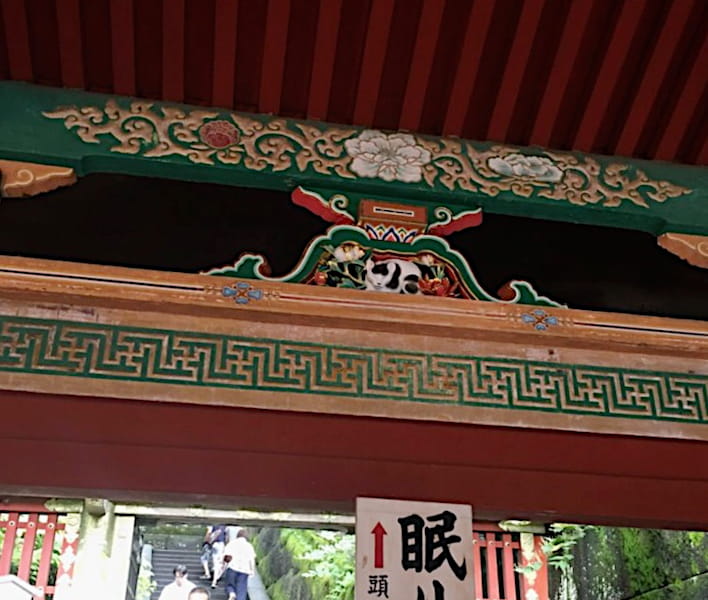 At the Sakashita-mon gate, there is a carving of the famous “Sleeping Cat,” but it is so small that some people may miss it. Please pay attention to the direction indicated by the arrow.

Visit the inner shrine where Ieyasu Tokugawa is buried 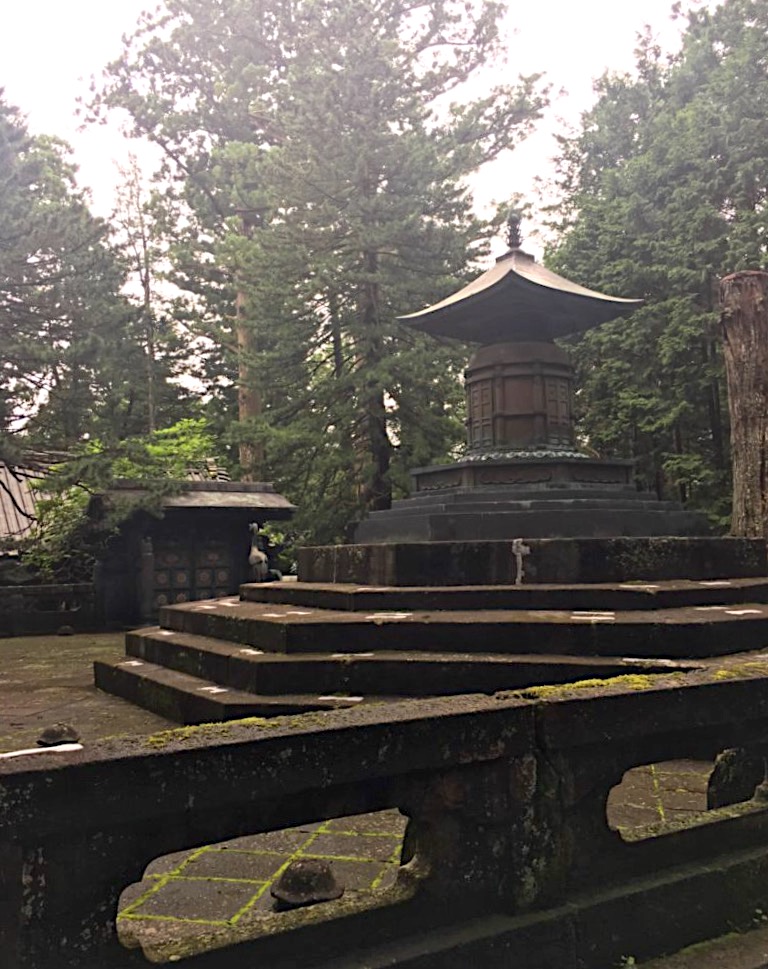 Climbing the long stone stairs leading to the inner sanctuary, you will come to the tomb where Ieyasu Tokugawa is buried at Nikko Toshogu Shrine. The pagoda in the center is made of an alloy of gold, silver, and copper.

Compared to the splendor of the Yomei-mon gate, the inner shrine is a quiet and serene place.

How many Toshogu shrines are there in Japan?

Toshogu refers to a shrine dedicated to Tokugawa Ieyasu. Toshogu shrines exist not only in Nikko, but all over Japan.

It is said that at one time, nearly 700 Toshogu shrines were built, of which only 130 remain today.

Where are the tombs of the shoguns of the Edo period?

It is well known that Ieyasu Tokugawa and Iemitsu Tokugawa are buried in Nikko, but where are the graves of the shoguns of the Edo period other than Ieyasu and Iemitsu?

Only the last shogun of the Edo Shogunate, Yoshinobu Tokugawa, is buried at Yanaka Cemetery in Taito Ward, Tokyo.

Arriving at Nikko Toshogu Shrine in 2.5 hours from Tokyo

Visit the Kanamaru-za Theatre to See How the Seri and Mawari-butai Work! Learn about the history of Kabuki

There is a hot spring facility called Katakurakan (片倉館) in Suwa City, Nagano Prefecture. Katakurakan is a classic Wes...

In mid-November we went to Miyajima in Hiroshima Prefecture. Miyajima is one of Japan's most popular tourist destination...
2021.11.04

One of the most enjoyable things to do after visiting a shrine or temple is to eat local specialties at the stores along...
2021.11.04
Meiji Jingu Shrine｜A Visit to Shibuya’s Oasis with a Vast Forest
How Long Does It Take to Visit Otsuka Museum of Art? ｜Tips on How to Get Around The Museum
Home
Kanto
Tochigi