In the Usuki City of Oita Prefecture, there is a place called Usuki Sekibutsu (Usuki Stone Buddhas), where nearly 60 Magaibutsu carved into the rock walls are lined up.

Magaibutsu “磨崖仏” refers to stone Buddha statues that have been dug into rock walls in their original state.

The Usuki Stone Buddhas have high artistic value and are representative of Japan’s Buddhist statues.

This article is about the Usuki Stone Buddha (Usuki Magaibutsu) in Oita Prefecture.

It is not clear when the Usuki stone Buddha (Magaibutsu) group in Oita Prefecture, Kyushu was created.

They are thought to have been carved into the rock walls of Usuki City between the Heian and Kamakura periods.

In Japan, there are many different types of Magaibutsu all over the country, but only this one, Usuki Ishibutsu, has been designated as a national treasure.

The Buddha images in the Magaibutsu are all unique, and many of them have such beautiful faces that they could be considered works of art.

The four groups of cliffs in the Usuki Stone Buddha are divided into the following four groups. 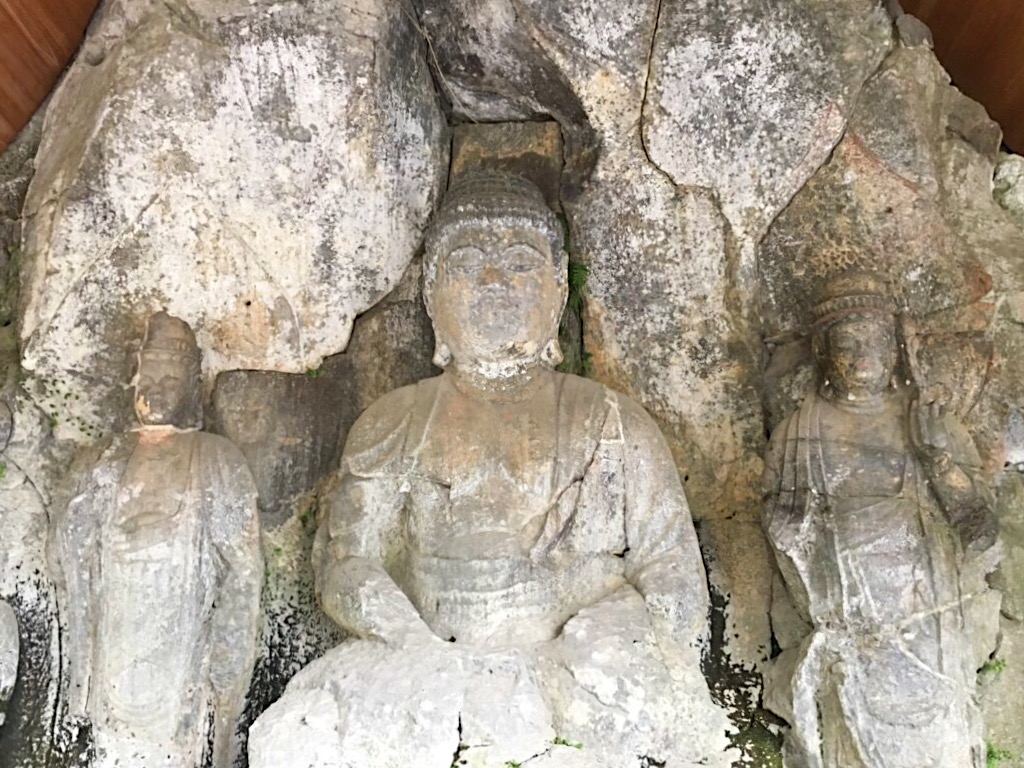 After purchasing a ticket, walk through the entrance for a while and you will see the first and second group of stone statues of Hoki stone Buddha on your right. The word “hoki” means cliff or precipice.

This is a corner where stone Buddha statues such as Nyorai Sanzon, Jizo Jyuoh and Amida Sanzon are lined up on the rock wall. The stone Buddha in the photo above is a statue of Amitabha Sanzon, which was carved in the Heian period. 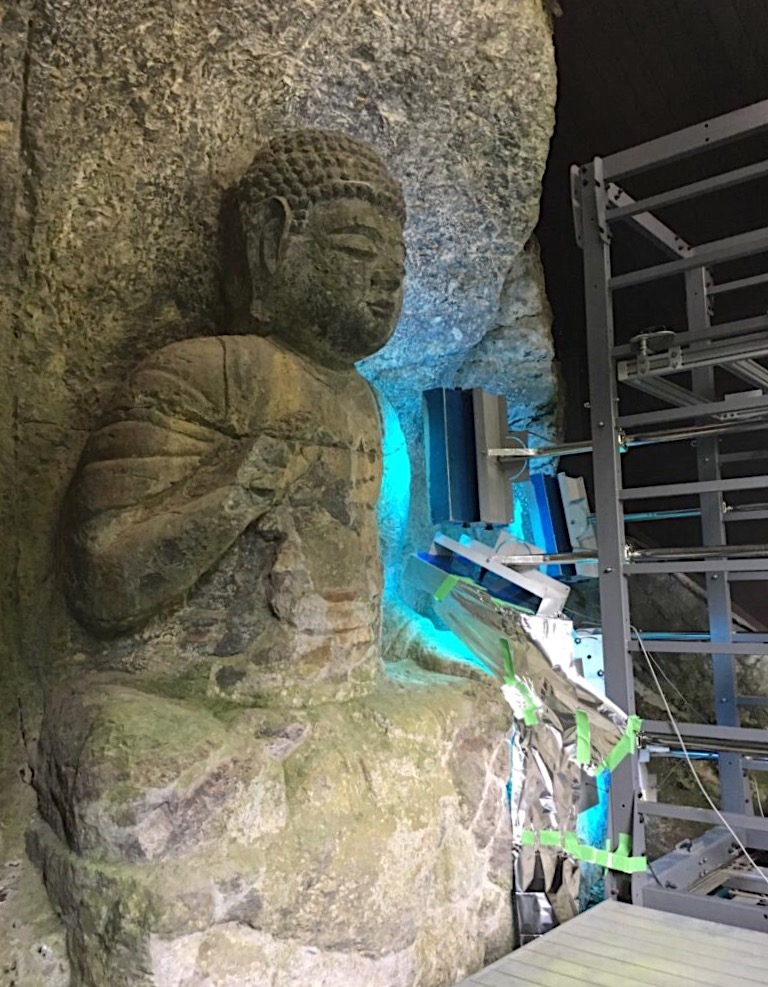 As we walked along the route, the next thing we saw was the Sannosan Stone Buddha. When we visited, they were restoring the statue, and scaffolding was set up around the Nyorai statue in the center.

The blue light that the statue is exposed to in the photo above is ultraviolet light. When moss and ferns grow on the rock walls, they gradually damage the stone Buddha, so they use ultraviolet light to keep it from deteriorating.

This group of Sannoyama stone Buddhas is also a work from the Heian period. 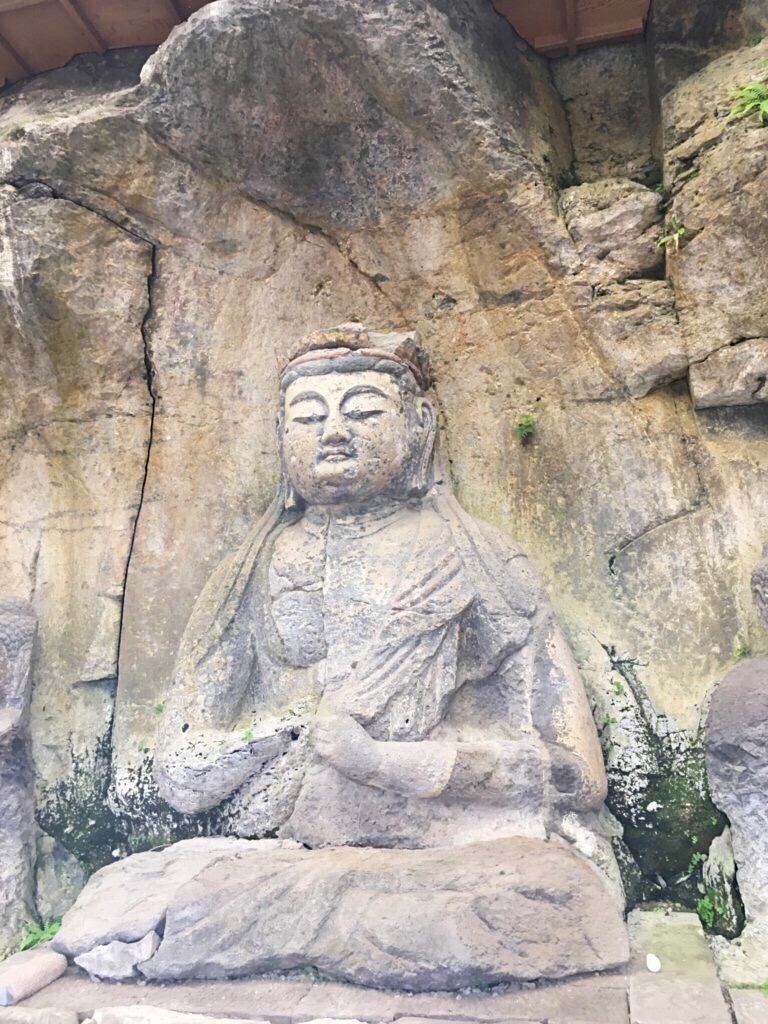 All of the stone Buddha statues in Usuki are covered by the roof of the main hall for protection.

Each of the stone statues of Buddha in Usuki has a different face.

Some of their outlines have become a little blurred due to weathering over the years, but all of them have their own distinctive faces.

In particular, the Dainichi Nyorai statue in the Koen stone Buddha group had a simple, child-like face at first glance, but I never got tired of looking at it.

If you have a chance to travel to Oita Prefecture, please visit the Usuki Stone Buddhas.

Other sightseeing spots in the area

The Usuki Stone Buddha is located near popular hot spring resorts such as Beppu Hot Spring and Kurokawa Hot Spring.

Risonare Yatsugatake｜Facilities and Events You Can Enjoy Even on a Day Trip!

In Hokuto City, Yamanashi Prefecture, there is a resort hotel called Risonare Yatsugatake. In addition to accommodati...
2021.11.04

Deciding Where to Buy Your Goshuin Stamp Book is One of the Joys of Travel!

A Goshuincho is a book used when having a Goshuin stamped at a shrine or temple. Isn't it difficult to decide where t...
2021.08.14

Nagano Prefecture is famous for its soba (buckwheat) noodles. "戸隠蕎麦 (Togakushi soba)" is one of the three most famous so...
2021.11.04
Atashika Beach｜A Clear Blue Beach with Calm Waves That Makes You Want to Snorkel
Shirakami-Sanchi｜Stepping into a World Heritage Mountain Range with Virgin Beech Forests
Home
Kyushu & Okinawa
Oita